A jabberwonk at the London School of Economics is loose, and Jules Crittendon has located the beast's steaming pile and is on the hunt:

Which brings us to Iraq. Jacques correctly notes that in the wake of U.S. failure there, Iran will emerge as a power. He fails to notice any problem with that, only equating Iran's rise with a hypothetical but laughable notion of a rise in European Union power.

What is interesting here is the Euroview Jacques is treating us to: A U.S. failure in Iraq does not have dire consequences, but in fact is desireable in how it will give the neo-cons their comeuppance and force the United States into what Australian Foreign Minister Alexander Downer once accurately disparaged as "multilaterism of the lowest common denominator."

But jabberwonks where ever they are found, are all about revisionist history and distortion of truth. They gyre and gimbal in the wabe, happily rewriting the historical record in order to justify their current policies of appeasement and surrender; protecting and enabling evil. 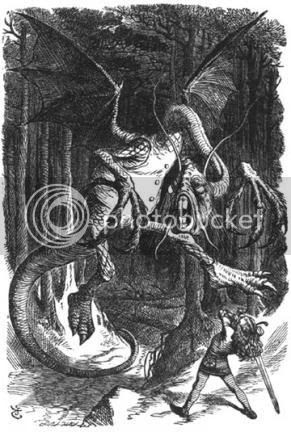 It is all mere mimsy on the part of the European (and American) political left. As they furiously outgrabe in an effort to implement their political agenda; and bask in their brillig self-righteousness, the manxome foes that threaten all of civilization keep whiffling and burbling onward.

The jabberwonky political left, with eyes of flame and postmodern claws that catch, is so intent on undermining those awful, unilateralist neocons (the greatest threat to civilization as they know it) and biting at the heart of the American neocon President; that they are happy to ally themselves with the the Ahmadinejubjubbird and the and the frumious Islamosnatch.

As I suggested in the previous post, it is long past time that those of us committed to reality, reason and truth took our vorpal sword in hand and kill this rhetorical beast dead, once and for all.

It will take leadership--something the crop of mome raths and borogoves in the ranks of both Republicans and Democrats are incapable of providing.

This country used to have no shortage of heroes or heroines. But would we even recognize a true hero now--someone who will say what needs to be said and will stand up unflinchingly for this country and its values--or would such a person be vilified and castigated unceasingly and unmercifully by the jabberwonks? I think you already know the answer to that.

That's why we must pause for a moment in uffish thought and consider that the first step in dealing with the enemies at the gate is to deal with the rhetoric of the enemies within. Our only hope lies in exposing their totalitarian agenda over and over again; as many times as necessary, to as many people as we can reach-- as we wait for someone of the caliber of a Reagan or Kirkpatrick to enter the fray.

Now that would be a frabjous day.
Posted by Dr. Sanity at 2:24 PM