It has been so productive in the past:

...it's past time to knock down a myth that appears to be driving the panel's deliberations: the notion that the Bush administration's refusal to talk with Iran and Syria is the reason for our inability to stabilize Iraq.

The premise--pushed by Democratic politicians and others--is absolutely false. The people pushing this, among them Jimmy Carter and Zbigniew Brzezinski, and Sen. Chuck Hagel, seem intent on sandbagging President Bush into negotiating from a position of weakness over some form of "grand bargain" with some of our most deadly enemies. But the fact is that plenty of engagement has already been taking place. For one thing, Syria retains an embassy in Washington; and the United States has one in Damascus. As for Iran, there are plenty of opportunities for the United States to talk with it in forums such as the United Nations and the International Atomic Energy Agency, where both states are represented. And America has been trying for decades to resolve differences diplomatically with both regimes.
[...]
Based on the historical record, the advocates of U.S. engagement with these regimes are delusional. The record, from Carter to Bush II, strongly suggests that neither regime has any interest in cooperating with us in Iraq, and are more likely than not to view the Carter-Brzezinski-Hagel approach as a demonstration of American weakness.

Delusional is precisely the word for it. Some, apparently prefer to refer to it as "realism".

I see this sort of cognitive process all the time with patients who simply can't figure out why responding in the same dysfunctional manner to events in their life doesn't seem to work any better on the third, fourth, or fifth try. God forbid they examine those thought processes and adjust their behavior to the reality of the situation.

By way of contrast, let's look at a group of individuals who are willing to squarely look at reality, acknowledge the problems they face, and identify the source of the dysfunction that impedes their moving forward. From Bill Roggio (hat tip: Instapundit)

While waiting to manifest on the flight to Fallujah, CNN played a news segment of President Bush announcing there would be no “graceful exit” from Iraq, and that we'd stay until the mission was complete. Two sergeants in the room cheered. Loudly. They then scoffed at the reports from Baghdad, and jeered the balcony reporting.

In nearly every conversation, the soldiers, Marines and contractors expressed they were upset with the coverage of the war in Iraq in general, and the public perception of the daily situation on the ground. The felt the media was there to sensationalize the news, and several stated some reporters were only interested in “blood and guts.” They freely admitted the obstacles in front of them in Iraq. Most recognized that while we are winning the war on the battlefield, albeit with difficulties in some areas, we are losing the information war. They felt the media had abandoned them. (Emphasis mine)

I bet the Baker Report won't address that issue in their assessment. Nor is it likely that it address this one. Read the entire article, and consider the psychology of fear that has been instilled in our fighting forces--not by the enemy, but by the rampant cluelessnes and hatred for all things military that emanates from both the Democrats and their lunatic leftist base.

To anyone who exists in the real world, both of theabove issues -- the unbelievable bias of the MSM in their Iraq reporting and their willingness to be the propaganda arm of the enemy; and the insane politically correct behavior demanded of our soldiers and marines in this war--are THE major impediments to arriving at a winning strategy in Iraq.

Oh yes, let's do engage Syria and Iran! We can see how wonderfully helpful Syria has been to Lebanon's dreams of democracy and I'm sure they will be equally helpful to Iraq's. And all of us, I'm sure, deeply appreciate that Little Mahmoud is just looking for a brotherly pen pal in the U.S.to whom he can confide and share his hopes and prayers for the world. 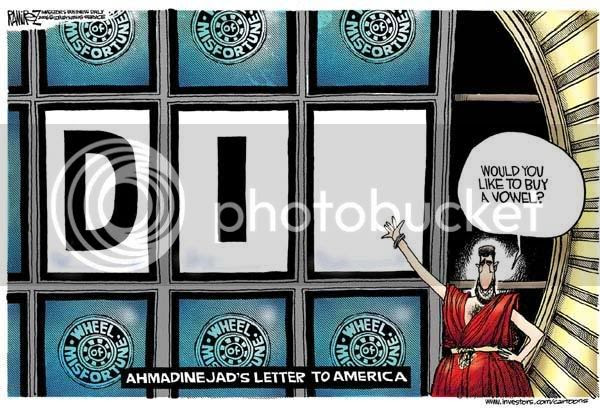 UPDATE: I should add that the whole idea of "engaging" with Iran and Syria that is being promulgated by many in the West now, is actually a form of psychological projection. Mostly, I talk about projection as being a psychological defense in which one's own negative emotions are attributed or projected onto someone else. In other words, it is attempt to shirk the responsibility for one's own feelings, thoughts, and actions and ignore reality.

In this particular case, the West (and Baker/Hamilton et al) are actually projecting their own positive emotional traits. It is the same psychological situation you regularly observe in hostages toward their kidnappers. One has to believe that the kidnapper or potential executioner is a caring,concerned individual with emotions such as you yourself possess in order to survive the overwhelming anxiety of being in their complete power. But, whether you project negative or postive emotions onto someone else, it is still a refusal to face reality, and behave in an adult and mature manner by acting in accordance with that reality. Grown-ups face reality and take the necessary steps to deal with it (see the Roggio excerpt above). Only children and adults who are emotionally overwhelmed and paralyzed resort to the primitive defense of projection.

In the long run, the use of this defense can only result in negative or devastating consequences.

UPDATE: Jay at Stop the ACLU has the text of the worse-than useless Baker Report, and a round-up of blog reaction to it.
Posted by Dr. Sanity at 10:06 AM