Was Cheney On Target? You Decide

Captain Ed is outraged, as well he should be. What I want to know is where is the outrage of the press? When Kerry claimed that Cheney had said the US would be more in danger of a terrorist attack if Kerry was elected (here's how CNN reported it), there was universal outrage (of course this was not what Cheney said, but everyone acted as if it were).

Now John Kerry's sister, Diana, has said that Australia is more in danger of a terrorist attack because of its connections with the United States and the Bush Administration. Not only is this far more outrageous and more damaging than anything Cheney meant--Kerry's position borders on treason; and it has the added effect --as the Captain points out--of interfering with an important US alliance during wartime; as well as attempting to influence the Australian election.

You don't have to be paranoid to understand this is yet more evidence of John Kerry's complete disregard for the interests of his country in an attempt to garner power for himself. The Kerry campaign doesn't care if it destabilizes democratic governments like Australia- let alone the United States. OBL's most clever plans couldn't be any better than what Kerry and Friends are already doing. 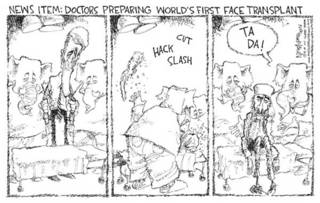 Cheney was right, in that there is certainly a CLEAR choice between Bush and Kerry on the way they view the War on Terror....

One views it as a serious threat to freedom, peace and civilization; the other views it as a tool to be used to achieve the power he has craved his entire life. You decide which view we are safer embracing.

UPDATE: Reader Dismuke at Captain's Quarters says, "Gee - why bomb trains prior to an election when you have the Kerry campaign out there trying to accomplish the exact same thing?" Great point.

I enjoy your blog, which I discovered via LittleGreenFootballs. I was wondering why your blog calls me "Richard." I'm in the process of buying a new computer, and want to preserve my anonymity (not that I'm "Richard"). I'd appreciate an answer so I can keep bloggers from knowing who I am. You're a benign blogger, but I also check some rather disgusting Islamofascist sites, and I don't want them to know who I am.

Thanks for your input.

Jakita--all I can think of is that if you have a blog on blogspot it can identify you. I am not aware that it can identify anyone unless they also have a blog or are registered on blogspot. You can sign in as anonymous if you like. Email me and let me know exactly where the "richard" is showing up. My guess is that when you go to post a comment it says "Posting as _Anonymous _ Richard? Is that correct?

Weird, now I'm on another computer, and it just says "hi." I see that it's the ad for amazon, so it's probably linked to the amazon customer. Anyway, thanks for the info. I'm slightly paranoid--not a lot, just slightly--because of my attempts to maintain anonymity, even though it's probably impossible.