The always humorous Scrappleface has a great take on the upcoming debates:

(2004-09-28) -- John Forbes Kerry said today that he will not "go it alone" during Thursday night's presidential debate, which will focus on foreign policy and national security."At the debate I'm not just going to do one thing differently that George W. Bush," said Mr. Kerry, "I'm going to do everything differently. Not only will I build a real international coalition to confront the leader of the current regime, but I also have an exit strategy."Asked to react to Mr. Kerry's plans to bring the leaders of France and Germany to the debate, President Bush said, "Bring 'em on. Next question."

Actually, if Kerry himself appears at the debates, he will have "mustered" a coalition (if you count his multiple positions on every issue, that is! ) 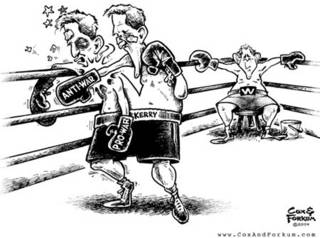