Betsy's Page has a link to John Podhoretz who takes the Democrats to task for complaining about the new Bush ad with John Kerry windsurfing.

The tough, clever ad capitalizes on Kerry's foolish decision to let himself be photographed on a windsurfer during the Republican Convention.
Instead of hitting back with a comparable lightness of touch, the Kerry people went berserk. Mike McCurry, Kerry's spokesman, called it a "shameful advertisement that shows a disturbing disregard for those fighting and sacrificing in Iraq."
Then the Kerry campaign offered up a counter-ad with an American flag in the background making the same point: "In the face of the Iraq quagmire, George Bush runs a juvenile and tasteless attack ad."
So the Kerry camp is trying to argue with a straight face that because there is horrible news from Iraq, Bush has no right to tease or make fun of Kerry. In this vein, McCurry told reporters, "People do not want to see lighthearted advertising when families are very heavy-hearted about what's happening to their loved ones."
Such a complaint seems to draw a parallel between the campaign hardships of John Kerry and the personal hardships of military families, which is frankly a pretty stupid direction to go in for a struggling presidential campaign.

The above just gives me an excuse to show something my brother Paul forwarded me in an email, which I thought was pretty funny: The Official Seal of the Democratic Party: 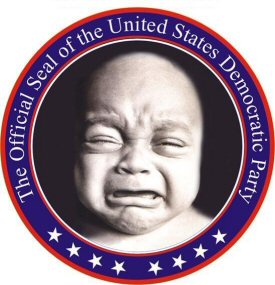 (As someone once said very seriously, "Fuck 'em if they can't take a joke.")

I suppose any candidate has to focus on criticism of the current administration in order to set forth the problems for which the candidate intends to offer solutions. I haven't seen realistic solutions yet from Kerry/Edwards, though, and I think they are presenting themselves as whining babies, instead of problem-solving adults.