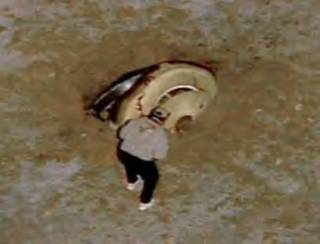 A man takes a close-up look at the return capsule from NASA's Genesis spacecraft mission after it crashed into the earth in the Utah desert when its parachute failed to open, September 8, 2004 in this image from NASA video. The space capsule, returning solar particles to Earth after a three-year mission that probed the origins of the solar system, crashed in the Utah desert before it could be captured in a mid-air recovery, officials at the Jet Propulsion Laboratory said on Wednesday. The silver, disc-shaped capsule containing 'star dust' was jettisoned as planned by the Genesis spacecraft but its parachute failed to deploy and the capsule spun out of control and crashed. It was not immediately known if the container carrying the solar material inside the capsule survived the impact. REUTERS/Reuters TV

I feel especially sorry for the scientists who have waited years to get their results.... I hope something of the data can be salvaged.