STUFFING VIETNAM DOWN THE THROATS OF THE LEFT

Personally I rather liked that Bush used their own rhetoric against them the other day, and challenged their unwillingness to admit what the consequences of pulling out of Vietnam really were for this country....They didn't like it, did they? As far as I'm concerned, that means he hit a bullseye. 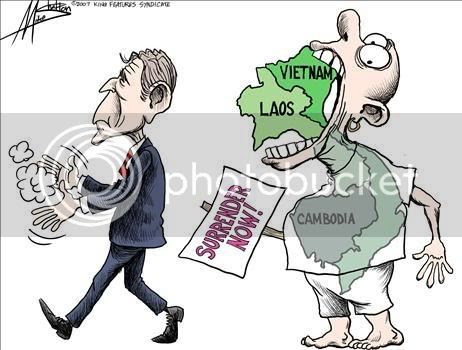 Victor Davis Hanson notices some of the insanity that has ensued since Bush stuffed Vietnam back down the left's throats:

In all the hysteria over the Bush Vietnam evocation, people are losing their sanity. Now those in Vietnam are being dragged out and quoted by the mainstream media to prove Bush’s lunacy. But what are subjects of a police state supposed to say — “I wish our present Communist dictatorship had lost”? Do we think Cubans routinely give widely publicized interviews criticizing their Castroites — and live?

And then there is the “they weren’t that bad” strain of criticism, as if we are supposed to have forgotten that well before the partition hundreds of thousands fled the north to escape Communism, that Ho’s collectivization efforts, as was true anywhere in the Communist world where such confiscations took place, killed thousands, or that during Tet hundreds, maybe even thousands, were taken out and shot in Hue by Communist thugs. No need to mention the boat people, the reeducation camps, and Cambodia.

The problem with talking about Vietnam is the paradox that all seem to wish to forget — reminiscent to Thucydides’s remark that an ill-thought out thing like Syracuse could have nevertheless worked had the Athenians not torn each apart at home.

So few want to admit that something that was a clear-cut disaster from 1963-68, got better with Vietnamization and counterinsurgency between 1969-73, was largely stabilized and viable by 1974-5, and then completely undercut by Congressional military cutbacks, and refusal to fund promised arms. So Vietnam, like the expedition to Sicily, was a blunder that could have nevertheless — with a little more resolve — finally still been saved and followed the evolutionary path of a South Korea.

Note the recent quotes from Pakistani and Syrian strongmen to the effect that the U.S. abandons its friends. These are not right-wing talking points, but candid assessments by selfish, calculating dictators about the world as they saw it. Their referents, like bin Laden’s, are mostly Vietnam.

Candid assessments by the narcissistic and calculating political left are never forthcoming unless their ideology can benefit from such analysis. To them, getting the US out of Vietnam was a great (personal) victory. It doesn't matter to them that they unleashed the killing fields and enabled tyranny for generations. They were and are completely virtuous in their desire to end war, no matter what the cost to others.

All they were saying then and now is to give peace--and oppression, and hate, and evil--a chance! And who could argue with that sentiment?

UPDATE: Robert Tracinski has some related thoughts this morning on Bush's invocation of Vietnam:

This certainly has caught the left by surprise, since the history of the Vietnam War is territory they thought they owned and controlled, which is why they have attempted to fit every conflict since 1975 into the Vietnam template. An editorial cartoon published early during the invasion of Iraq aptly depicted the Washington press corps as unruly children in the backseat of the family car, pestering the driver with the question, "Is it Vietnam yet? Is it Vietnam yet?" They assumed that if Iraq was Vietnam--if it fit into their Vietnam story line about dishonest leaders starting a war of imperialist aggression that was doomed by incompetent leadership and tainted by American "war crimes"--then it was guaranteed to be a humiliating defeat for their political adversaries....

Whatever the failures of American strategy in Vietnam, there is no doubt that the anti-war left pushed for American failure and accomplished it by persistent and vigorous legislation. And that is the crucial issue. If the architects of the Vietnam War in the Johnson administration can be criticized (as Moyar does) for not doing enough to win the war, the later anti-war left actively pursued American defeat and humiliation as their goal. They didn't merely want us to withdraw; they wanted us to lose, and they did whatever was necessary to make sure that happened.

So instead of being a story of the failure of imperialist, war-mongering Republicans, the Vietnam War was the story of two separate failures by Democrats.