The Clinton Presidential Library holds an estimated two million documents relating to Hillary Clinton's activities as First Lady -- a record on which she has explicitly based her campaign for the presidency. She has a page dedicated to it on her campaign web site. Her mantra, "strength and experience", rests on her tenure in the White House.
So why won't the Clinton library open these records to the public? The Los Angeles Times reports that the presidential library won't release them until after the 2008 election. 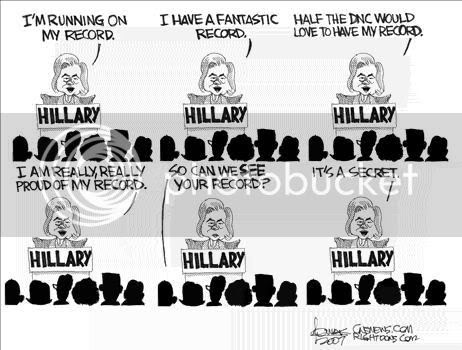 This is not the first time that information about Hillary which might have negative political repercussions has been suppressed.

Clearly, someone (gee, I wonder who?) believes that the public consumption of all this information would not be helpful to the one or both of the Clintons' political ambitions....
Posted by Dr. Sanity at 7:09 AM