More than 70,000 members of a hardline Muslim group held a rally in Indonesia that heard calls for a caliphate -- or Islamic rule -- to govern the world.

And then there is this first-person narrative from inside the Islamist movement:

I was neither eastern, nor western; I was a Muslim, a part of the global ummah, where identity is defined through the fraternity of faith.

Islamists insist this identity is not racist because Islam welcomes people of all colours, ethnicities and backgrounds. That was true, but our world view was still horribly bipolar. We didn’t distinguish on the basis of colour, but on creed. The world was simply divided into believers and nonbelievers.

Recently Caroline Glick wrote in the Jerusalem Post about just one of the coming wars that Israel and the west will have to cope with:

In the not so distant future, we will find ourselves at war with Iran. Today, the choice of whether we fight that war in our own time, and before Iran gets nuclear weapons is in our hands. If we hesitate, if we and the rest of the free world waste precious time with worthless diplomatic wrangling with the ayatollahs, war will come to us, but on the enemy's terms. And we will have only ourselves to blame.

I take him at his word. I take him very seriously because lives are at stake.

That is part of my job, and when I have evidence of either suicidal or homicidal intent, I must act.

However, I accept that it is one of the "social control functions" that psychiatrists are expected to perform by society at large. And I try to do my best--because I have it within my (admittedly limited) power to prevent something bad from happening.

In my career, I have not always been successful at preventing a suicide or a homicide, but I always err on the side of caution when innocent life is at stake. I suppose it is grandiose, arrogant, and a lot of other things that I don't particularly admire.

But the bottom line is that if I did nothing, when I could have done something to try and prevent the tragedy-- I could not live with myself.

Taking action is even more imperative if there is a psychotic/delusional component; e.g., let's say that the homicidal individual believes that he is a special messenger of God who is destined to bring about the apocalypse and the return of some holy guy who disappeared hundreds of years earlier.

It would be tantamount to malpractice if I did nothing; or, if I simply made the homicidal person "promise" that he won't do anything stupid. Someone who is delusional to begin with is unlikely to be bothered by breaking a "promise" he thinks he needs to make in order to achieve his ends (and additionally wants to keep me from hospitalizing him).

They mean it. They have intent to do what they say. They have demonstrated repeatedly over the last decade and more that they have the means to make it happen; and that there is no aspect of civilized behavior they are not willing to suspend; no level of murderous rage and homicide/suicidal behavior that is closed to them. They fervently believe that their god gives them permission to force us to submit to them or to kill us-- in his name.

And all the wishful thinking and talking about "peace" and "brotherhood" and "common values" blah blah blah are pure, unadulterated psychological denial on the part of the intended victim. 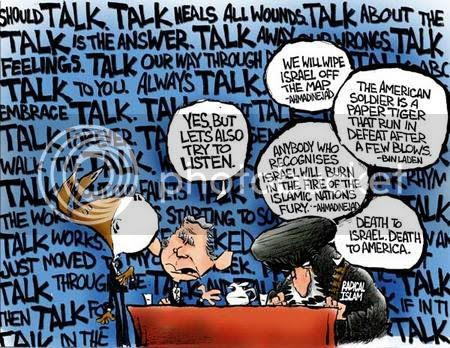 UPDATE: Welcome trolls from Salon! Your comments demonstrate the pervasive psychological denial (primarily on the left side of the political spectrum) so much more effectively than anything I could possibly post. Keep on keepin' on! You all are simply a treasure for a teaching psychiatrist!

BTW, what number of people "peacefully" demonstrating for the imposition of sharia law on the world would frighten you big, strong virile masculine leftists? Clearly, violent and rather large protests against some stupid cartoons won't do it. How about a few hundred thousand demonstrating against the U.S. and chanting anti-American slogans? Or, a A few million who openly support killing innocents in the name of Islam? You've got to wonder if any evidence at all is able to break through the barrier of psychological denial and make the left get off their intellectual asses and actually take a look at the reality out there?

A little non-PC humor from Mark Steyn seems appropriate at this point:

Come fry with me

JPod, just to put Ames in the big geopolitical perspective:

Number of Iowans who participated in alleged first key vote toward choosing the leader of the world's superpower: 14,203

Number of Indonesians who turned up to demand the imposition of Islamic law worldwide at a routine rinky-dink nickel'n'dime rally generating virtually zero press coverage: 70-80,000

And I don't think they got free fried Oreos.

Imam to Tommy Thompson organizer: "My fourth wife went to a sharia rally in Indonesia."

Imam: "No. Unlike your supporters, she had to provide her own transportation."