WHEN THERE ARE NO WORDS AND SPEAKING FAILS...

..to capture the anguish of parents who awaken one morning to discover that their daughter's murderer is happily smiling on the front page of the New York Times and starring in an HBO special film.
From The Corner, a letter from those parents:

"Today’s New York Times carries a review of a film called “Hot House” that goes inside Israeli prisons and examines the lives of Palestinian prisoners. We’re not recommending the film or the review. But we do want to share our feelings with you about the beaming female face that adorns the article. You can see it here.

The film is produced by HBO. So it’s presumably HBO’s publicity department that was responsible for creating and distributing a glamor-style photograph of a smiling, contented-looking young woman in her twenties to promote the movie.

That female is our child’s murderer. She was sentenced to sixteen life sentences or 320 years which she is serving in an Israeli jail. Fifteen people were killed and more than a hundred maimed and injured by the actions of this attractive person and her associates. The background is here.
Neither the New York Times nor HBO are likely to give even a moment’s attention to the victims of the barbarians who destroyed the Sbarro restaurant in Jerusalem and the lives of so many victims. So we would be grateful if you would pass along this link to some pictures of our daughter whose name was Malki. She was unable to reach her twenties - Hamas saw to that. 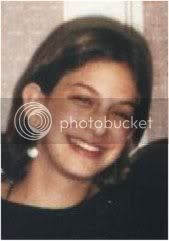 Though she was only fifteen years old when her life was stolen from her and from us, we think Malki was a beautiful young woman, living a beautiful life. We ask your help so that other people - far fewer than the number who will see the New York Times, of course - can know about her. Please ask your friends to look at the pictures - some of the very few we have - of our murdered daughter[ed.note: picture to the right is Malki]
And remind them of what the woman in the Israeli prison - the woman smiling so happily in the New York Times - said last year. “I’m not sorry for what I did. We’ll become free from the occupation and then I will be free from prison.”

With so many voices demanding that Israel release its terrorist prisoners, small wonder she’s smiling.

With greetings from Jerusalem ,
Frimet and Arnold Roth
On behalf of Keren Malki

I pass this letter on, on behalf of Malki--and all the other silent and innocent victims of the insane barbarism and unrestrained hatred that floods the world today; and which many in the world ignore, rationalize, minimize, and excuse: thus further enabling and encouraging its continuation.

The silence often of pure innocence
Persuades when speaking fails.
—William Shakespeare, The Winter's Tale, 1611
Posted by Dr. Sanity at 6:35 AM