THAT WHICH MUST NOT BE NAMED

Hey! Terrorism is NO BIG DEAL! "The 9/11 attack was a crisis that has largely passed"! By calling it a global war on terror we've only helped that which must not be named and hurt ourselves!

Yeah, if we pretend it doesn't exist, it will definitely go away.

To put it in complicated psychiatric terms, fear can make people stupid. The issue is, of course, who among the fearful is more stupid? Those who are so incredibly afraid of terrorism that they have to pretend it doesn't even exist? Or those who admit to a rational fear of the Jihadists and choose to face it and fight? 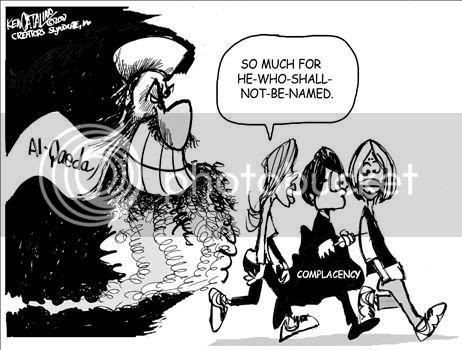 Go see Harry Potter and the Order of the Phoenix for further details on how well this strategy works.
Posted by Dr. Sanity at 5:33 PM