AN ILLNESS OF THE SOUL 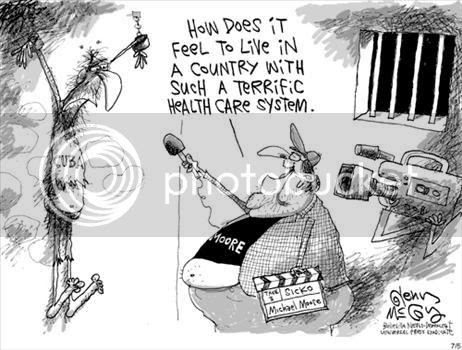 Sometime back, Val at Babalu Blog discussed "Cuban mythology", particularly the recurring theme about how wonderful Cuban health care is:

Every single time the island of Cuba and fidel castro's revolution are covered anywhere in the media one of the points always mentioned is Cuba's free healthcare. You can practically time it. If it's in print, you get the lead issue in the first and second paragraph, a mention of fidel castro or one of his cronies in the third paragraph and then the plug for the lauded free healthcare available to Cubans in the fourth. I dont think Ive ever read an article about castro or Cuba where the "healthcare" isnt mentioned.

All the usual gushing praise for Castro's healthcare system has been resurrected more enthusiastically than ever since the glowing report from Michael "Sicko" Moore, who gleefully exposes the dirtly little secrets about American health care, giving example after example of how insurance companies and "the system" have screwed average American citizens (and interestingly, not the poor). John Podhoretz, who reviews the movie has this to say:

Usually, calls for this radical solution to America's health care ills are laden with appeals to the conscience of those who have coverage about the nightmarish lives of those who don't. Cleverly--and Moore is nothing if not clever--Moore is trying to convince people with health care coverage that they might even be worse off than people without. At least the uninsured don't believe they are covered, only to discover their insurance company won't pay for treatments it considers experimental. The sad tales on display here, and they are undeniably sad and infuriating, involve not only the failure of people to get proper treatment but also the profound disappointment they felt at being turned down by their insurer.

Fortunately, Moore proposes a cure for the disappointment with a sweet, uncomplicated message. We can have it all: great medical care with no bills, administered by loving institutions, and practiced by happy doctors. That's the way it is in Canada, Britain, France, and even Cuba, according to Moore. And we won't even have to pay for it, the way we do now.

I have worked in the American healthcare system most of my adult life. I have watched it become more and more "socialized" and less and less market driven (at least the part where the doctor and patient interact); and as it has gone in the socialized direction, it has slowly but surely gone down the toilet. With every new government-mandate (and they come out daily, believe me; emanating from the concerned state and federal level as fast as our beloved representatives can write them) ; every cost-saving restriction; every righteous criminalization of physicians; the quality of care has deteriorated proportionally and the quantity of paperwork escalated in equal measure. No longer are patients responsible for paying for their health care, some "third-party" is (usually the government). There is now a huge industry of middlemen and women who exist solely to stand between doctor and patient and shout, "NO!" to both of them.

In other words, the problem with American healthcare is that there is already too much government control, and too few payers (there should be millions of payers-- each and every person must take responsibility for their own precious health and that of their loved ones-- and not pass off the responsibility to the collective who basically doesn't care about them as individuals in the least. To the extent that our system today rigidly determines what kind of financial transactions and treatment options are permitted, you have a sicko system indeed.

But to suggest that MORE government and less individual responsibility is the solution to today's " health care crisis" is not only disingenuous, it is absolutely ludicrous.

As someone once famously said, if you think healthcare is expensive now, just wait till it's free.

For Michael Moore to pimp for Fidel Castro and it mythologically "wonderful" healthcare system is beyond despicable. It reveals either a profound ignorance about the real world manifestations of commmunism; or fanatic dedication to an abstract ideology and not to real people in the real world.

I grew up during the Cold War. I was assailed with stories about the Soviet Union and its "scientific and medical achievements"; as well as its "economic progressiveness". I had the impression that the USSR was a serious rival of the U.S. in all these areas. After all, didn't they launch the first man into space? A remarkable achievement, right?

Some years later, I was sent to the USSR on a NASA trip at the height of the Cold War to meet with some of the researchers at the Institute for Biomedical Problems (IBMP). From the moment I arrived in this people's republic, it was obvious that I was in a 3rd world country. Everything was grungy and dirty. And I mean everything. The sheets at the slummy hotel I was staying at were filthy. I shared a bathroom with two other rooms, both occupied by men. The bathroom was so disgusting that for two days I couldn't bring myself to take a shower (the tub was crusted in dirt and didn't look as if it had been cleaned in years). There were dead bugs on the floor of the room. The radio in the room did not work. The window in the room could not be completely closed (it was November and the outside temperature was about 18 degrees). Did I mention that this was an ELITE hotel for academics visiting the IBMP and other Soviet institutes?

As I wandered around Moscow, the only people I saw were standing in lines to get food. There was one line for bread. One for milk. One for meat. The faces of the people were dull and resigned. Faceless women wrapped in scarves for warmth sluggishly swept the dirt on the sidewalks from one side to the other (I could never figure out why). Above the streets, on the buildings were old banners that proclaimed in Russian "Glory to Soviet Science".

When I tried to buy something in a "tourist" store (under the supervision of several Soviets assigned to me) the clerks (there were four of them, although there were very few people in the store) completely ignored me for the longest time; then when I went to pay they never once spoke to me or looked at me. They kept up a conversation among themselves that seemed to have something to do (as far as I could tell from my limited Russian)with the last time they had bought meat it had been bad.

At the IBMP, scientists I was supposed to confer with on psychological issues in space, spent most of their lecture time talking about the "wonders" of Soviet science. Their papers were peppered with such phrases. In private, when they were sure none of their bosses were listening, they would plead with me to tell them what other researchers were doing in their field. Did I think that their research was interesting or useful? Most places I have travelled in the world to visit scientists, I would be queried at length about my work. But the Soviet scientists were desperate to know what was going on in their fields. They were not permitted to read "outside journals"; there was noone who could review and critique their work, except their immediate colleagues. All too often, the political considerations overrode scientific ones.

Every evening these scientists would quietly apologize to me and others in the group because they had to publicly denouce us as "capitalist liars". Over and over again we were told, "We have to say these things to get along here."

It was an eye-opening experience for me to see up-close how totalitarianism chips away at the human soul and at human dignity; destroying any talent; encouraging mediocrity; crushing independent thought; and eliminating initiative. The evidence of this simple truth was all around me.

Take a close look at the pictures over at Babalu Blog linked above. What you are seeing is the world of people who don't care anymore. I saw the same thing in the Soviet Union in the 80's. The stench of hopelessness and mediocrity is unmistakable. These are the symptoms of a slowly disintegrating human soul.

Which is why something like this is so incredibly appalling. That artists would defend Castro and his oppressive regime is the height of self-delusion and is a betrayal of the human spirit that art expresses.

That Michael Moore wouls say such things and prefer the Cuban system over the U.S. is not in the least shocking. The man is an idiot; specifically, the variety that loves to bash American and capitalism at every opportunity, even as he cashes in and personally benefits from his association with them.

For every instance that Moore presents, I can give you a dozen counter-examples of how the doctors and healthcare professionals I have worked with have done extraordinary things for patients.

And if you are, like Moore, inclined to think of Cuba as a "worker's paradise" you might just read this post by an EMT who was stationed at Guantanamo for a while and is now in medical school. Here is some of what he has to say:

We deployed in the vicinity of the fenceline. We met the refugees as they approached, and with weapns in hand, denied them entry to the base. They had managed to traverse a kilometer deep minefield covered by towers with machine guns to get to this point. They had left everything they had ever known in order to get out of there. And we stopped them. We had orders. We had our orders, so we followed them. After enough shouting and threatening, the refugees eventualy gave up and headed back. Back into Cuba. While I was sweating my balls off under the hot sun, these refugees made a mistake. They had gotten through the minefield the first time, but they had not followed in their own footsteps going back. While I was thinking to myself how I wish these people would hurry up and go back so that I could head back to someplace with air-conditioning, one of them stepped on a landmine.

That explosion touched my world.

Then, I witnessed the worst thing I ever saw in my life.

As the dust cloud wafted away from those refugees, nobody ran. Nobody screamed. Nobody said anything.

They just laid down to die in the middle of a minefield that was the sun's anvil.

Think of how badly you would not want to die like that. Think about that real hard. Think about slowly dying of exposure in a minefield. Think about what would make you risk such an outcome. Think about it real hard, and then remember that as bad as that was, it was better than going back.

The apologists of tyranny are again hard at work trying to redeem the one of the last outposts of communist enslavement. They see a "worker's paradise"; a "healthcare utopia", but underneath the civilized veneer of Castro's Cuba is the same deadening illness of the soul that infected all the other failed communist and socialist "paradises".

And for that illness, the only cure is Freedom.
Posted by Dr. Sanity at 7:03 AM