SPITTING IN THE FACE OF THE U.S. MILITARY

Hot Air has a roundup of information on the identity of "Scott Thomas" and The New Republic story whose credibility has come under quite a bit of scrutiny. Ace reveals some interesting information that demonstrates there is more to this story and to "Scott Thomas" Beauchamp than meets the eye; and John Podhoretz tells everyone to "chill out".

But the damage is already done. And once again, as the smoke clears, the political left has managed to defame and undermine the U.S. Military and promote the prominent leftist notion that it is composed of a bunch of sociopaths and sadists.

I could say the same thing, actually, about the composition of the ranks of the left; but why bother? As Podhoretz notes:

The only issue here was, and remains, whether the stories Beauchamp told in his Diarist (and in the two that preceded it) were matters of fact, or embellishments of tales he had heard around the base, or were invented out of whole cloth.

The answer to that crucial question should have been determined PRIOR to publishing the story that appeared in TNR.

And, can anyone doubt that the story was rushed to publication because it just happened to fit in the editors' pre-existing ideological template, which views the military only in this light? Somehow, I suspect that Michael Yon's incredible dispatches or Bill Roggio's would never pass ideological muster in that environment; but Private Beauchamp's titillating prose fit in just right(or is it just left?). 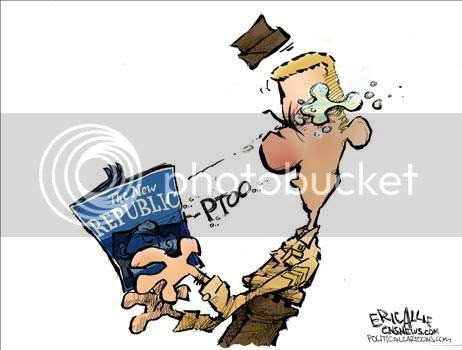 But never forget how much they support the troops; or how extremely patriotic they are!
Posted by Dr. Sanity at 7:21 PM