PARANOIA TO THE NTH DEGREE

Iranian intelligence operatives recently detained over a dozen squirrels found within the nation's borders, claiming the rodents were serving as spies for Western powers determined to undermine the Islamic Republic.

"In recent weeks, intelligence operatives have arrested 14 squirrels within Iran's borders," state-sponsored news agency IRNA reported. "The squirrels were carrying spy gear of foreign agencies, and were stopped before they could act, thanks to the alertness of our intelligence services."

It's difficult to make up stuff like this. A normal human mind cannot wrap itself around a paranoid fantasy so bizarre, let alone create it.

I mean, who knew that squirrels could be supporters of the Jewish/Zionst conspiracy? But there you have it. I guess if a culture believes that it is a crime to place cucumbers and tomatoes next to each other because they are different genders, there's no telling how out-to-lunch their thought processes could be or what realms of fantasy and delusion they might be subject to.

Remember, the Iranians think the Holocaust, which actually happened, is a Western urban legend.

Auguries of Paranoia
(with apologies to William Blake)

All of delusion in a tiny squirrel
And projection in holocaust denial;
A psychosis encompassing all the world;
Where tomatoes and cukes are on trial.

The human soul within a cage
Does not put Allah in a rage.

He loves his women clad in veils
Those shapeless burqas stifle wails;
And children strapped to a suicide bomb
Will leave this life without 'salaam'

A headless body on the path
Is testament to Islam's wrath.
Each outcry from a soul enslaved
A document of god depraved.

Arrest all squirrels for espionage;
Your reasons cannot camouflage
Paranoia to the nth degree--
It's visible for all to see.

And when you hear that Allahu yell
A jihadi's found his way to hell.

All of delusion in a tiny squirrel
And projection in holocaust denial;
A psychosis encompassing all the world;
Where tomatoes and cukes are on trial.

UPDATE: I just had to steal this from The Corner: 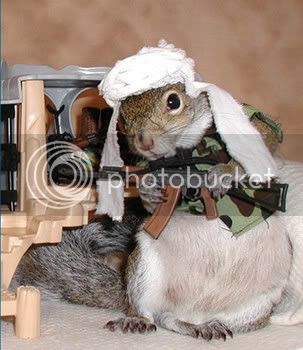