SCARY STORY TIME AT THE SLEEPOVER 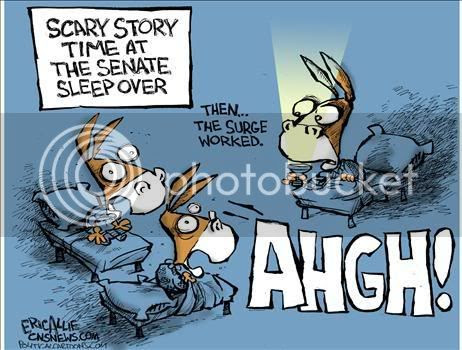 With every release of good news; with every optimistic appraisal; the Democrats become more and more determined to surrender. Doesn't this haste seem rather unseemly to you?

It sort of reminds me of the Monty Python and The Holy Grail "Bring out Your Dead" skit where the old man keeps saying, "I'm not dead!" while another man keeps insisting he is--or he soon will be; eventually the guy is whacked on the head so that he can be counted as "officially" dead and taken away.

There is nothing that the Democrats would like better than to whack Iraq over the head and officially declare it dead. Their inappropriate and reckless haste to surrender to Al Qaeda in Iraq and declare defeat in order to humiliate Bush and suck up to their lunatic base--in spite of multiple early reports of significant progress and context and the consequences of failure is an act of desperation.

I am not a big fan of John McCain, but this is what he said yesterday in the Senate, and it clearly demonstrates what a statesman he is:

No matter where my colleagues came down in 2003 about the centrality of Iraq to the war on terror, there can simply be no debate that our efforts in Iraq today are critical to the wider struggle against violent Islamic extremism. Already, the terrorists are emboldened, excited that America is talking not about winning in Iraq, but is rather debating when we should lose. Last week, Ayman al-Zawahiri, al-Qaeda’s deputy chief, said that the United States is merely delaying our “inevitable” defeat in Iraq, and that “the Mujahideen of Islam in Iraq of the caliphate and jihad are advancing with steady steps towards victory.” He called on Muslims to travel to Iraq to fight Americans, and appealed for Muslims to support the Islamic State in Iraq, a group established by al Qaeda.

General Petraeus has called al Qaeda “the principal short-term threat to Iraq.” What do the supporters of this amendment believe to be the consequences of our leaving the battlefield with al Qaeda in place? If we leave Iraq prematurely, jihadists around the world will interpret the withdrawal as their great victory against our great power. Their movement thrives in an atmosphere of perceived victory; we saw this in the surge of men and money flowing to al Qaeda following the Soviet withdrawal from Afghanistan. If they defeat the United States in Iraq, they will believe that anything is possible, that history is on their side, that they really can bring their terrible rule to lands the world over. Recall the plan laid out in a letter from Zawahiri to Abu Musab al-Zarqawi, before his death. That plan is to take shape in four stages: establish a caliphate in Iraq, extend the “jihad wave” to the secular countries neighboring Iraq, clash with Israel – none of which shall commence until the completion of stage one: expel the Americans from Iraq. Mr. President, the terrorists are in this war to win it. The question is: Are we?

The supporters of this amendment respond that they do not by any means intend to cede the battlefield to al Qaeda; on the contrary, their legislation would allow U.S. forces, presumably holed up in forward operating bases, to carry out targeted counterterrorism operations. But our own military commanders say that this approach will not succeed, and that moving in with search and destroy missions to kill and capture terrorists, only to immediately cede the territory to the enemy, is the failed strategy of the past three and a half years….

Those are the likely consequences of a precipitous withdrawal, and I hope that the supporters of such a move will tell us what they believe to be the likely consequences of this course of action. Should their amendment become law, and U.S. troops begin withdrawing, do they believe that Iraq will become more or less stable? That al Qaeda will find it easier to gather, plan, and carry out attacks from Iraqi soil, or that our withdrawal will somehow make this less likely? That the Iraqi people become more or less safe? That genocide becomes a more remote possibility or ever likelier?

Mr. President, this fight is about Iraq but not about Iraq alone. It is greater than that and more important still, about whether America still has the political courage to fight for victory or whether we will settle for defeat, with all of the terrible things that accompany it. We cannot walk away gracefully from defeat in this war.

Meanwhile the cognitively dissonant Democrats (no staggering geniuses there) are charging towrd retreat led by the likes of Harry Reid who one day says "the war is lost" (4/19/07) and the next day that "No one wants us to succeed in Iraq more than the Democrats." (4/20/07).

The truth is that no one wants to lose in Iraq more than the Democrats, and the scariest story they can imagine is that the new strategy in Iraq is successful--and thus the evil Republicans would get political credit.

If they can whack the Iraq war on the head and kill any chance of success now, they believe they will have the advantage.

How short-sighted and stupid is that?