PARANOIA AND PROJECTION IN THE ARAB WORLD:The Externalization of Blame for Arab/Islamic Dysfunction **UPDATED**

The always informative MEMRI has a translation up of some of the Syrian government's press articles criticizing other Arab governments in the region:

Recently, the Syrian government press has been directing harsh criticism against some Arab countries, claiming that they are helping the U.S. implement its plans at the expense of the Arabs. The columnists have also condemned the Arabs for rejecting the policy of resistance - which they said had proven its effectiveness in Lebanon - and for normalizing relations with Israel. The writers used harsh terms to describe certain elements within the Arab countries, calling them "Judas Iscariot," Arab "neo-cons," "forces of evil,"and "Jews within [the Arab world]."

You have to read all the excerpts to get the full effect, but the the quoted sections exemplify how the Arab world always seems to externalize blame for all the problems of their society.

One typical excerpt:
"The Lebanese Judas Iscariot is the individual or group that rejects national unity and attempts to keep [Lebanon as a fragmented] federation of ethnic cantons, based on the advice of the Elders of Zion...

Some time back, Lisa Beyer wrote about the "big lie" of the Middle East:

...the pan-Arabism that once made the Palestinian cause the region's cause is long dead, and the Arab countries have their own worries aplenty. In a decade of reporting in the region, I found it rarely took more than the arching of an eyebrow to get the most candid of Arab thinkers to acknowledge that the tears shed for the Palestinians today outside the West Bank and Gaza are of the crocodile variety. Palestinians know this best of all.

To promote the canard that the troubles of the Arab world are rooted in the Palestinians' misfortune does great harm. It encourages the Arabs to continue to avoid addressing their colossal societal and political ills by hiding behind their Great Excuse: it's all Israel's fault. Certainly, Israel has at times been an obnoxious neighbor, but God help the Arab leaders, propagandists and apologists if a day ever comes when the Arab-Israeli mess is unraveled. One wonders how they would then explain why in Egypt 4 of every 10 people are illiterate; Saudi Arabian Shi'ites (not to mention women) are second-class citizens; 11% of Syrians live below subsistence level; and Jordan's King can unilaterally dissolve Parliament, as he did in 2001. Or why no Middle Eastern government but Israel's and to some extent Lebanon's tolerates freedom of assembly or speech, or democratic institutions like a robust press or civic organizations with independence and clout--let alone unfettered competitive elections.

Indeed, if Israel did not exist, the Arab world would have to invent it, because without Israel to blame all their problems on (and, of course, America), the nations of the middle east would not be able to go on.

David Frum suggested in an article titled, "Why is it Always About Israel?" that:

Might it not be closer to the truth to say that Arab radicalism is the cause of the Israeli-Palestinian dispute--not the result of it? There is no peace because Israel's neighbours--and too many of the world's Muslims--cannot accept the right of a non-Arab, non-Muslim minority to live unsubjugated in the Middle East. That is the true "core" of the dispute, and it cannot be fixed by negotiation.

Frum was correct in suggesting that the problem cannot be fixed by negotiation, but he is off the mark about the source of the problem. While it is true that Arab radicalism deliberately promotes the Israeli-Palestinian dispute and continually disrupts any possibility of resolving it, the cause of that dispute lies in the psychological dysfunction of the Arabs themselves.

Just as in a clinical case of mass hysteria (which it resembles), Arabs as a group have closed off their rational, thinking minds; and with the encouragement and justification of the most medieval aspects of their religion are operating on the basis of the most primitive and dysfunctional of unconscious needs and feelings.

There doesn't seem to be any limit to the self-delusion that is rampant in the middle east.

Psychologically, it is very difficult to abandon a delusion, particularly when that delusion serves the purpose of accounting for an unacceptable status quo. For too long the so-called leaders in the Middle East have --in a manner similar to Jim Jones--been quenching the thirst of their people with poisoned Kool Aid. They have made it easy to believe that all their problems and troubles are caused by the Jews (or America or the West). Maintaining the delusional system and nourishing it regularly is crucial to their identity as individuals and as nations--otherwise it would be necessary to look inside their own hearts and souls for the underlying causes of their political, economic and spiritual stagnation.

In truth, the Arab world cannot be proud of itself. The Islamic and Arab cultures that contributed mightily to the progress of mankind, have willingly become the poster children for religious intolerance, hate, violence and even genocide. There is very little the Arab world has to be proud of- and pointing to past glory only serves to highlight how far they have fallen. All the phony ‘Arab pride’ in the world has not motivated them to build. All they have done is destroy- and that destruction is a symptom of self hatred. People who hate themselves, destroy everything around them. People that believe in their higher selves, build. The same is true for nations. Nations, societies and cultures are not remembered for what they destroy. They are remembered for what they have built.

As Siggy points out in his remarkably astute post, the behavior of the Arab world is not really about pride...indeed, what do they have to be proud of? They have perverted beyond all recognition a religion that once upon a time could compete head-to-head with Christianity and Judaism in what it contributed to the whole of humanity. They long ago abandoned the ability to create, and now only possess the capacity to destroy. Their people live in poverty and oppression, controlled only by the belief that their situation is the fault of "the Jews" or America.

This is the legacy of psychological projection and paranoia. The unacceptable thoughts or feelings are denied ("not owned") by the person or group experiencing them, and instead are projected onto another individual or--as in this case--a group (racism, anti-semitism etc. are all projections). Thus, the person who originally had the offensive thought or feeling becomes the helpless victim of the evil "other" and they do not have to cope with the fact that the evil lies wholly within themselves.

Projection as a psychological defense mechanism can eventually lead to full-blown paranoia, where--even to the most casual of observers--the delusion (or projection) is completely out of touch with reality. And, there is plenty of paranoia to go around in that part of the world. Recently we have even been able to witness how the paranoia and hate are eagerly passed on to the next generation, thus preserving the externalization of blame and preventing any real growth or maturity as a people and ensuring the continuation of the pathology that is destroying any ability to build a functioning society.

Not that long ago, the paranoid leaders of Iran are held a "scientific" Holocaust conference in Tehran, intent on proving that the Holocaust has been foisted on the world in order to justify siezing Palestinian lands to create the state of Israel. And to prove how "scholarly they are in that part of the world, they tipped the scales of research to make sure they get the conclusion they desire by banning anyone with a dissenting voice from the deliberations. One can only conclude the organizers wanted to put all their "scientific" and "scholarly" ducks in a row before they wipe Israel off the map. This is a story about the vision and the protocols worthy of these "elders of Tehran"--except, it is not fiction but fact.

We can assume that this conference, too, was not for any creative purpose, but only to justify more destruction and more wanton killing and genocide, all of which has become the hallmark of Arab/Islamic decivilization; and which is psychologically inevitable when a group resorts to paranoia and psychological projection to defend against reality.

Despair.com has a "motivational" poster that suitably captures the essence of the Arab/Islamic world : 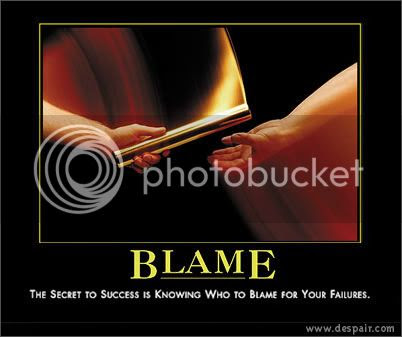 UPDATE: Siggy has put up a fascinating article , "A World Without Israel" by Josef Joffe. I urge you to read it, especially the comment trolls (of course, that will make them definitely decide NOT to read it because why would they want to think? There's no advantage in it for them.
Posted by Dr. Sanity at 8:02 AM