WE WILL EXTERMINATE YOU ! 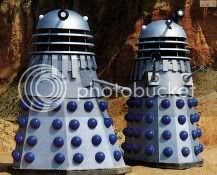 Does that sound familiar? With the most recent release of Osama Bin Laden's threats against America and the West, it finally came to me he and his Al Qaeda thugs remind me of! I don't know why I didn't make this connection sooner, since I am a big Dr. Who fan (going back twenty years or so).

The Daleks are a ruthless extraterrestrial race bent on universal conquest and domination, utterly without pity, compassion or remorse. Their most infamous battlecry is "EX-TER-MIN-ATE!", with each syllable individually screeched in a frantic electronic voice (to hear the battlecry of the daleks, click here and run your mouse over the picture of the dalek).

Except for the "extraterrestrial" part, I think it is an accurate description of jihadis in general. The daleks have a mutant core of living material from which all emotion toward others not of their race has been bred out. They are surrounded by a metallic casing (that looks like a salt or pepper shaker) containing all the various lethal devices that allow them to kill (In jihadi terms, that would be represented by the various injunction in the Qu'ran regarding jihad and infidels). 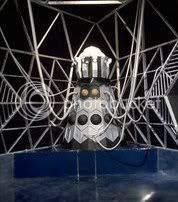 Bin Laden is the emporer dalek, sitting in his cave on life support.