THE JOKE IS ON THE REST OF THE WORLD

Rantings of A Sandmonkey has compiled and translated Egyptian cartoons that were drawn in response to the Danish cartoons and there are some very interesting things that can be seen.

At least five of the Egyptian cartoons suggest that violence has been perpetrated against Islam. Several seem to seriously depict Islam as cutely "peaceful" (see below). In one cartoon, Islam is depicted as as a "dove" of peace; a the other, it is a "flower" being watered by an angel: 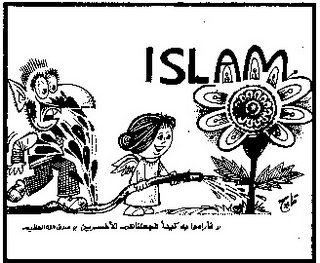 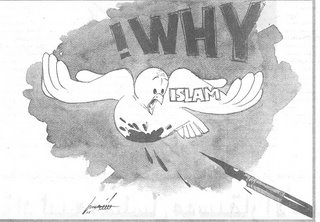 Several others depict the Danes as pigs and rats (with strong antisemitic themes). You should go to the link to appreciate all of them.

One thing they are not (except unintentionally) is funny. The anger and rage shine through quite clearly.

It is interesting to me how the cartoon artists seem to equate speech and drawing with the reality of violence. This is done quite naturally and self-evidently--at least to the artists. Yet there is something quite obvious missing, and that is that there is no appreciation whatsoever of how silly such symbols for Islam (such as a flower or a dove) seem to a world who has had to deal with Islam's unrelenting violence and barbarism for some years now--you know, things like beheadings? suicide bombings? mindless and violent riots? etc. etc. etc.

Any normal person would have to ask, is it possible that they could be so deluded?

In other words, there is a bizarre disconnect between their own feelings about Islam (they see it as a "dove" or a "flower") and Islam's actual behavior in the real world, as well as the way others in the world might see it.

This inexplicable naivete is a result of blatant denial; societal repression; and the ever-present projection of all unacceptable feelings onto primarily the Jews (but any outside group is actually acceptable; and they then become identified with the Jews).

What is most interesting is their conflation of actual violence with cartoons; and drawing implements with real weapons. In the West, we often say that "the pen is mightier than the sword"; but that is because our culture values non-violence as a method of dealing with conflict over violence. In a culture where independent thinking and any consideration of new ideas are frightening, and truly threaten to destroy the very foundations of their religion; it is no wonder that they are unable to distinguish between fantasy (what might be imagined in thoughts and ideas) and reality.

The healthier psychological defense mechanisms such as sublimation -- in art, for example; and humor are out of bounds because they require some insight and maturity. Altruism is extended only to bona fide members of their own culture and quickly withdrawn at the first sign of any deviancy from the cultural norm.

Healthy coping options in Muslim society are thus severely limited by the fact that as a culture, their growth has been stunted by the inflexible template of their religion.

This reminds me of the lack of humor about one's self that is so typical of young children. Most often, very young children are completely unable to appreciate the healthiest kind of humor simply because they are too immature and their egos too fragile to be able to enjoy self-deprecation and subtlety. They are unable to step outside themselves and objectively evaluate themselves or their behaviors. I discuss this issue and its applicablity to the Muslim world in this post.

The absence of any of the mature psychological defense mechanisms in the behavior of Muslims in response to the Danish cartoons; their inability to separate thoughts/feelings from actual behavior; and the childish lack of insight and self-awareness that blinds them to how ridiculously absurd their own blatantly violent behavior in response to perceived "violent" drawings actually is--all these things lead an outside observer to the conclusion that we are dealing with an child-like, immature and downright primitive society.

Except, of course, that these are adults and a hell of a lot more dangerous than a developing child. If their behavior wasn't so dangerous it would almost qualify as a joke or childish prank. But it isn't funny when an angry child is playing with a loaded gun.