The headline in the New York Times reads:

After reading the article, here's how I would have framed the story:

Why, you may ask, would you read an article about John Kerry, the man who would be king? Well, I'm always interested in Kerry's rantings because they are so fruitful from a psychiatric perspective.

At any rate, the information about the influence of the Koran actually comes up at the end of the article; and Kerry also cited the Bible and the Torah as critical in the development of his character. But the reference to the Koran strikes me as rather original and at the same time fundamental about the trademark Kerry style of pandering. Interestingly, I couldn't find the exact text of his remarks which apparently were made by telephone to a political conference organized by Al Sharpton.

Ann Althouse is similarly flummoxed by all this:

The Koran? Come on!

It's always so painful when Kerry tries to show there's something more to him than politician. He only seems to bo even more of a politician. Kerry laid on the Jesus because "the group" he was talking to was something organized by Rev. Al Sharpton. He then brought in the Torah and the Koran -- we can assume -- because seemed politically unwise to lean toward the Christian religion. But who believes that the Koran has influenced his social conscience? I can believe he reading the Old Testament affected how he thinks about the world, though his preference for the word "Torah" must stem from an urge to be inclusive. He wants to include the Muslims too, so he throws in the Koran. If he were really talking about sacred books that he's read, that had an impact on how he thinks about the world, it would be much more believable to cite Buddhist or Hindu texts, which those of us who were young in the 60s were wont to dip into. 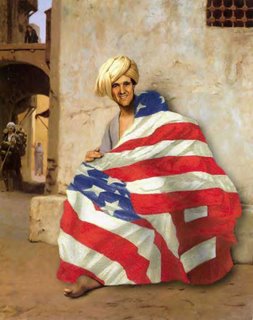 Actually, I suspect the holy book that most influenced Senator Kerry is this one; or perhaps this one.

Seems like all this painting needs is a star of David and a cross somewhere included, and Kerry will have himself completely covered--but please don't question his...religion.
Posted by Dr. Sanity at 3:17 PM