A Strange Way to Show Support...

Thomas Sowell makes several excellent points about the "but we support the troops" mantra from the Left:
During the recent election campaign, it has been a liberal mantra that they "support the troops" while opposing the war in Iraq. Just what does supporting the troops mean -- other than just a throwaway line to escape the political consequences of a long history of being anti-military?
It certainly does not mean making the slightest effort to understand the pressures and dangers of combat, so as to avoid the obscenity of sitting in peace and comfort while second-guessing at leisure some life-and-death decisions that had to be made in a split second by men 10,000 miles away.
The latest example is the now widely-publicized incident in which an American Marine in Iraq shot and killed a wounded terrorist in Fallujah. Chris Matthews on Hardball spoke of "what may be the illegal killing of a wounded, unarmed insurgent" -- the politically correct media term for a terrorist -- and asked: "Is there ever a justification for shooting an unarmed enemy?"
The unreality of this question is breath-taking, both logically and historically. How do you know that someone is unarmed, when finding out can cost you your life? A hand grenade is easily concealed and can kill you just as dead as if you were shot by a machine gun or hit by a nuclear missile.
American troops in Iraq have already been killed by booby-trapped bodies. During World War II, wounded Japanese soldiers sometimes waited for an American medical corpsman to come over to help them and then exploded a hand grenade, killing them both.

Sowell goes on to say that:
The rules of war, the Geneva Convention, do not protect soldiers who are not wearing their own country's uniforms. To get the protection of rules, you have to play by the rules.
Terrorists are not enemy soldiers covered by the rules of war. Nor should they be. They observe no rules.

Read the whole piece. I think it is interesting how quickly the media have jumped all over this story. I cannot help feeling that they hope to make this case into another Abu Ghraib with which to demonstrate their own moral superiority. Cox and Forkum appear to agree with me: 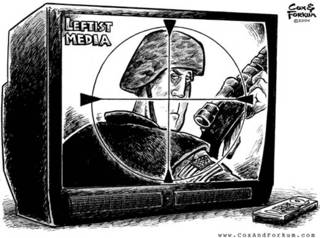 The enemy has them in the crosshairs....

Meanwhile, as usual, more attention is being given to a soldier killing a terrorist than this. Is it too much to ask that the Media show some balance, she asked rhetorically??

And, by the way--what happened to that CBS inquiry about the forged documents used by Dan Rather? I'll bet they're just investigating away with all their might, don't you think?