This is how the Palestinian Authority (you know, the group the Yasser Arafat ran) is portraying Dr. Condoleeza Rice, after she was named as the US Secretary of State, replacing Colin Powell: 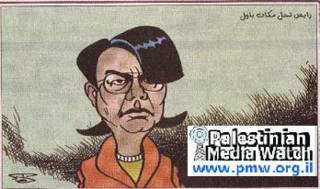 And this is how a talk show host describes Dr. Rice, whose accomplishments I can't even begin to list here (hat tip: LGF)

After referring to Dr. Rice on the air as an "Aunt Jemima" and Colin Powell as an "Uncle Tom":
"I'm not apologizing for what I said," Sylvester said Thursday in an interview. "I stand by it.
"I was aiming that directly at a black person that is letting himself (and herself) be used by an administration that has been extremely hostile to minorities," he said.
"Being subservient and being a black role model are two different things. I think (Rice) has not only been bad for the country and for national security, but I think she's been a bad black role model.

I'm sure we can all guess who John Sylvester thinks would be a good black role models. Any foul-mouthed, trash-talking, dirtbag who "sticks it to whitey" is good enough for him. But not Dr. Condoleeza Rice, because she is (GASP!!) A REPUBLICAN. And there ain't nothin' worse than that, is there?

Or, how about that racist cartoon from October by Jeff Danziger depicting Dr. Rice as a barefoot Prissy from GWTW?

I have talked about the Left's Rainbow Hypocrisy in earlier posts, but it really, really, really steams me when they vilify someone who is in reality the "quintessential black female role model; brilliant, sharp, ascerbic, courageous, singular, ballsy all the right stuff" (as a commentor on LGF put it, and I couldn't describe her any better!).

How hateful the Left has become. I suppose they once stood for something. When I was in college, I never agreed with their methods, but I did believe in Truth, Justice,Freedom and Equal Opportunity. Things they seemed to be for. Obviously appearances can be deceiving.

What the Left seems to be unable to accept is that their ideology (all that marxist-leninist, socialist, communist crap) was not the path to any of those things. So, rather than abandon that sick, soul-destroying ideology--that resulted in the death and misery of literally millions all over the world, they have chosen to abandon Truth, Justice. Freedom and Equality. And anything or anyone that reminds them of that fact.