JUST A LITTLE TASTE OF THE THUGOCRACY

Joe the Plumber is discovering what happens when someone dares to question the Democratic messiah. It's not nice to go against the party line, and you'll pay.

UPDATE: More on the left's persecution of Joe the Plumber here and here.

UPDATE II: I don't think this story is going to go away. From a reader at The Corner:

I really don't like McCain. I'll probably vote for him just as a vote for divided government. I'm far too libertarian in my leanings to be comfortable with McCain (or Obama, for that matter).

That said, the way the pro-Obama media and bloggers, and Obama himself, have responded to Joe has got me nearly shaking with rage. They are attempting to destroy a man — a private citizen — who had the audacity to ask The One a question. Mind you, Joe was on his front lawn playing football with his son when Obama strolled up to give him his hopenchange spiel. Obama approached Joe, not the other way around. And Joe asked Obama an honest question. And Obama gave him an honest — and very, very revealing — answer. Again, mind you, the embarassment was on Obama's end, not Joe's. It wasn't a gotcha question.

And yet, for that Joe is being pilloried, every aspect of his private and professional life being sorted through and exposed. To prove ... what? What does that have to do with Obama's answer? What does Joe's situation have to do with Obama's philosophical answer — that he wants to "spread the wealth"? Obama's answer goes down the memory hole while the nation concentrates its fire on obliterating Joe the Plumber.

It's sickening, it's maddening and it's downright chilling.

Sorry for the length. But I am just SEETHING.

Remember, this is just a little taste of the thugocracy to come. 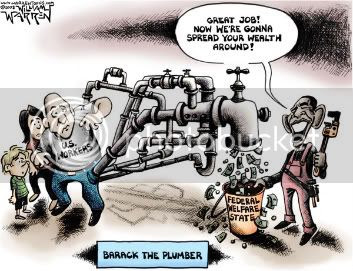