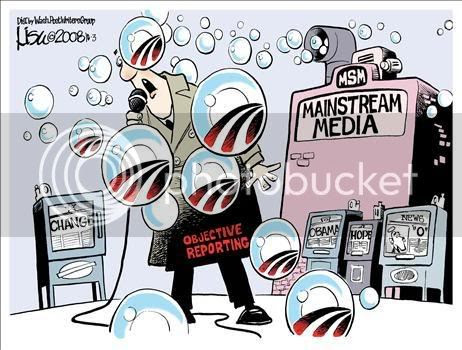 Did they even watch the same debate I did last night? I can only assume that they were prepared from the start to declare Biden the winner--no matter how many sincerely and gravely expressed "facts"... he completely made up.

I thought Ifil was terrible and should never (if she had any integrity as a journalist whatsoever) have moderated that debate. Multiple times she let Biden go way over his time limit; but she repeatedly stopped Palin immediately when her time ran out.

I thought Palin did extremely well overall compared to the blowhard she debated. I winced multiple times at her excoriation of Wall Street (they deserve it to some extent) and wished that she would have said the same about the Democrats who got us into the mess to begin with.

She missed a few other opportunities; and Biden is an experienced liar and managed to distort quite a lot of information, but Palin did great and Republicans should be proud. In fact, she did demonstrably better than Biden's inexperienced running mate in his first debate. Sadly, the press will simply blow bubbles and give both the Democrats a free pass. 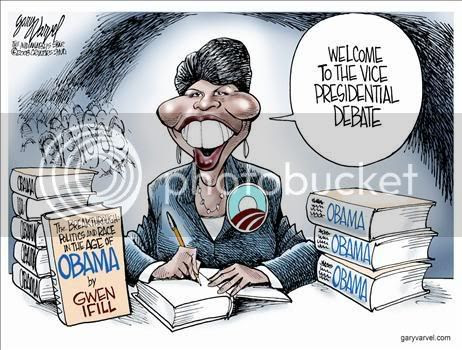 Personally, the most discouraging aspect of this entire presidential campaign is the unbelievable, completely overboard media bias in favor of Barack Obama. The media have lied, ignored, and completely obfuscated Obama's record and inexperience, even as they have attacked and become completely hysterical about Sarah Palin's. You cannot even argue key issues in this campaign because the media refuse to print the concerns that many reputable individuals have brought forth about Obama (see Stanley Kurtz's attempts to get the media interested in Obama's connections to William Ayers and his investigation into the CAC for a glaring example).

This seemingly willful blindness on the part of the media is eerily similar to "la belle indifference", a characteristic symptom of clinical hysteria and conversion disorder. We have seen it before in our biased MSM--and it has only gotten worse over the last few years.

It is way past time for this travesty perpetrated by the media to be completely and fully examined and exposed...except that the people who normally "examine", i.e., report on, such things are the ones infected with the pathology.

That is why it is so infuriating. My hope is that enough people have turned to blogs for information they cannot get from the regular news outlets, but I fear it is not yet enough.

Trusting today's media to report objectively (or at least present both sides of a question) is like sending a paranoid schizophrenic with delusions that the CIA have implanted a chip in their brain and can read their minds, to CIA headquarters to report objectively on CIA activities. He would be entirely incapable of doing so without insisting that his delusion was the reality.

Thus we have the situation where the media actually believe they are being manipulated and seduced, not by Barack Obama, the messiah who sends chills up their collective legs; but by John McCain, who doesn't stroke them and feed them as much now that he is a Presidential candidate.

I can live for four years with a President I despise (and certainly without the delusional insanity that has been the hallmark of those with BDS for the last 8 years since their candidates lost). I have done it multiple times before this point in history.

But what I cannot live with is a media that is no longer capable of giving reasonably fair and objective reporting on the critical issues of our time. I cannot live with propaganda. I cannot live with the opinionated nonsense that today passes for serious journalism on the front pages of our major newspapers--and I am not talking about op-ed pieces. Those are clearly marked as "opinion." But the day to day burying of important information to the end of articles; the misleading headlines; the rampant unfairness of a press that is obsessed with Sarah Palin's tanning bed and facials, but indifferent to Barack Obama's connections to homegrown and Islamic terrorism. A media that joyfully exposes what conflicts of interest Palin has had; but ignores Joe Biden's. A journalistic corp that joyfully and openly supports Barack Obama and hides or misleads about his lack of experience to be POTUS; but is so very sincere and courageous about getting it out to the public that Sarah Palin is "not qualified" to be VP.

In the end, I will have to let them blow bubbles all they like. But, as the American public has reason to know (especially when they look around at the economic mess brought to us through the collusion of Congress and Wall Street), eventually all bubbles burst and reality is eventually revealed. Sadly, reality doesn't much care about all those nice dreams of "hope" or "change". Reality is very unforgiving of willful blindness.

And when the Obama bubble finally bursts, there will be hell to pay.

"Today" on Last Night
From a reader:

Just a note that in the 8 am open for Today, the veep debate was the fourth story of six before throwing to Willard, and they showed more shots of Biden than Palin, while echoing Andrea Mitchell's earlier analysis at 7:08 (six minutes then onto the bailout, fair enough) that she "held her own...made no significant missteps."

Update: An anchor interviewing Chuck Todd on MSNBC just now (from memory): "This is a one day news story, we won't even be talking about it by dinner time."

I'm sure that's true — and Chuck agreed. But it is amazing how the press can focus on how Palin's a disaster and then the second she stops being one, the press yawns as if this is a non-story.

I noticed the same thing this morning listening to NPR. You know for sure that Palin won bigtime when the MSM news outlets have to bury it as if nothing happened.

This reminds me a lot of how my friends in the old Soviet Union used to assess the importance of various issues: if Pravda (which means "truth" in Russian) promoted something, they knew it was just more of the same old communist propaganda; if they ignored or minimized some issue, they knew something very big was going on that the propaganda machine didn't want them to know about.
Posted by Dr. Sanity at 7:55 AM