THE SANITY SQUAD - Iranian Theater of the Absurd

With the news that Amadinejad has "pardoned" the British hostages and they have been released, the world will be watching closely to see what the Iranian regime will do next. And they will most certainly do something provocative in the second act of this theater of the absurd.

The latest Sanity Squad Podcast is now posted at Pajamas Media Politics Central, and in it, the Squad takes up where we left off last time : discussing the Iranian hostage drama, produced and directed by the mullahs of Iran.

In the opening act, Britain gave us all a lesson in how not to negotiate from strength. Seemingly the Iranians have now received all the positive press they can possibly get from this situation; made themselves heroes and perhaps have pushed it to the brink of violence then stopped short of . It will be interesting to see what these young sailors have to say about their forced stay in Iran now that they are not under any coercion.

The question remains, what is the role of diplomacy and when should the threat of force have entered into the script had the hostages not been released? And most importantly, what is the West actually willing to fight for these days?

Victor Davis Hanson has it exactly right when he writes:

What is disturbing about the Iranian piracy is that it establishes a warning of what we can come to expect when Iran is nuclear, and how organizations like the UN, the EU, and NATO will react. If a few Iranian terrorists in boats can paralyze an entire nation and the above agencies, think what a half-dozen Iranian nukes will do. This was the hour of Europe to step forward and show the world what it can do with sanctions, embargoes, and boycotts, and how such soft power is as effective as gunboats—and it is passing.

The incident also redefines "asset". A European naval vessel, under current rules of engagement, seems to me more a liability, a floating diplomatic embarrassment waiting to happen. In this Orwellian logic, the British decision to mothball some of the ships now on duty in the Gulf makes sense: fewer chances that one will be challenged, humiliated, or attacked by Islamists.

Join Shrinkwrapped, Neo-neocon, Siggy and me as we continue to analyze the import of the latest Iranian manufactured drama.

(The Sanity Squad cartoon at the right is drawn by Eric Allie, whose collection of political cartoons can be found here and here). 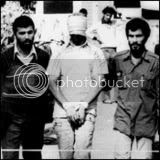 BTW, guess who the guy on the right is in this picture from the late 1970's during an earlier hostage crisis manipulated by Iran.... It was successful then for him--will this latest manipulation also serve the interests of the Iranian regime?? Stay tuned.

UPDATE: Siggy has a great post up, "Pardon Me? I don't think so":

In the film Schindler’s List, Amon Goth, (the notorious commandant of the Auschwitz concentration camp played by Ralph Feinnes) was struck by a remark made by Oscar Schindler at a party. Schindler tells a drunken Goth that ‘anyone can kill. Real power comes from the ability to forgive and pardon.’

The following morning, in what is a chilling and mesmerizing scene in film, Amon Goth looks into a mirror and says, ‘I pardon you,’ over and over. He repeats the remarks over and over, with various gestures, seeking the right ‘look’ for his supposed largesse, in which he can appear grand, magnanimous and humble, all the same time.

There is very little that is different between Amon Goth and Mahmoud Ahmadenijad and those who support them and share their ideas.