...is the one about the US economy, per Larry Kudlow:

It was truly an historic day on Wall Street yesterday as the Dow Jones Index rocketed to a record-breaking, first-ever, 13,000 close with a dramatic 136-point surge....

Stocks surged across the board with a 15-point gain by the S&P 500 and a 23-point gain in the Nasdaq. Record closings galore for transports, utilities, and the Wilshire 5000. The S&P 500 is nipping at the bit, just 30 points away from achieving its all-time high....

If I may, permit me to once again call this what it is—the greatest story never told.

We are in the midst of the longest uninterrupted bull market run in memory. We have record low tax rates on capital, a benign inflation rate, and recent economic releases suggesting the Goldilocks soft landing scenario remains very much in place.

But in the end, it all boils down to two simple things—two stock market locomotives that have created enormous, still untapped, value in equities. Viewers have heard talk about them night after night:

Mark my words, it ain't over yet.

Will George W. Bush ever get any credit for this?

Don't be silly, Larry. Of course he won't, particularly since the Democrats are still pushing the meme that the economy is in ruins and that poverty and misery are all on the rise because of Bush.

Bizzyblog wonders why "the Formerly Mainstream Media always seem to be 'surprised' by good economic news?"

I am sure this is a rhetorical question, since he has explained repeatedly why that same media cannot possibly allow anything to be printed which might reflect positively on Bush.

Over a year and a half ago, when the economic reports showed the US growing at an amazing rate, reports of this were nowhere to be found on TV news, nor in the headlines of the day. It was carefully tucked away in the business section of the MSNBC website or on the back pages of the major dailies. I wrote then that the American public was hearing "command hallucinations":

The American public is hearing voices. And like auditory hallucinations experienced by psychiatric patients, these voices whisper continual doom and gloom. They tell the American consumer that prices are too high. That the economy is tanking; that poverty is on the rise; and that everything is bad bad bad.

These voices are persistant and continual. They are unrelenting. They are often frightening. And like the command hallucinations that torment many of my psychotic patients, they are completely and totally untrue. You are bad. Life isn't worth living. They are trying to hurt you. Don't try, it's not worth it.

It is very rare for such voices to say anything at all positive. They have a specific goal--and that goal is the distortion of reality.

So why do patients believe them? Especially the one's that are bizarre and so obviously out of touch with any known reality? You know, the ones that say aliens have implanted electrodes in your brain and are monitoring your thoughts and things like that.

It is a triumph of false perceptions over reality. It is testimony to how profoundly and fundamentally people trust their perceptual faculties and let their peceptions rule, even when those perception come in conflict with common sense, truth, or reality.

We, the American people have come to have a similar trust in the voices of the MSM. Over the years, they have almost become an additional perceptual faculty that we rely on--simply because life has become too complicated and overwhelming, that the use of our ordinary senses is insufficient in the modern world.

In other words, we rely on the media in the same way we rely on our own senses to provide us with the information necessary to make decisions and judgements in the real world.

The MSM has become those evil voices inside our head.

But, you can count on one thing. If the Democrats can continue to scam the people into believing we are on the eve of destruction and complete economic meltdown; and if by doing so they can take back the White House in 2008; then within 6 months (possibly even less) they will be giving themselves credit for a "sudden economic turnaround" --Good times will be here again!

In essence, the dysfunctional and delusional Democrats along with their MSM henchmen treat the good news about the economy exactly like they treat any good news about the war. They don't want to hear about it because they've already decided what to think and any facts are irrelevant.

When you are unable to process reality, then all that's left are the voices in your head. And you can make them tell any kind of story you want. 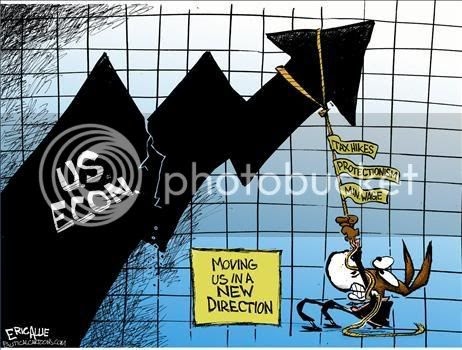 UPDATE: How about this incredible story from yesterday:

The record reflects taxes not withheld from individuals over the course of the year, but paid to the government before this year's April 17 income-tax deadline.

While some of those tax payments come from taxpayers who withheld less tax from their paychecks than they owed, much of it was owed on income from investments or profits.

"This reflects the fact that Americans in high-income brackets had a very good year in 2006," said Lou Crandall, chief economist at Wrightson ICAP in Jersey City, New Jersey.

The one-day total is a small fraction of the estimated $2.5 trillion in overall tax receipts the government is likely to collect in fiscal 2007, Crandall said.

But strong tax revenues point to the likelihood of a shrinking budget deficit, he said.

Notice that the Dems are no longer demanding the elimination of the Bush tax cuts? But will they admit that the cuts have generated more personal income, more spending and therefore more revenue? Never!

Instead we get parsed headlines that look at the rate of growth, instead of growth itself to make people believe that things are going badly. Consider the title of the linked article, then read the last sentence of the article:

Consumers whose shopping is indispensable to a booming economy boosted their spending at a 3.8 percent pace in the first quarter. That was a solid showing although it was slightly weaker than the 4.2 percent growth rate logged in the fourth quarter.

A key reason why consumers have remained resilient, even in the face of the painful housing slump, is that the jobs markets has managed to stay in good shape. The nation's unemployment rate dropped in March to 4.4 percent, matching a five-year low

If you actually read the article you will discover that the headline focuses on the only negative aspect they could find in the latest economic news.