THE CANCER THAT IS IRAN

According to Ian Bremmer, The mullahs are in no mood to compromise with the West:

As Iranian President Mahmoud Ahmadinejad waved goodbye earlier this month to the 15 British sailors and marines his government held prisoner for almost two weeks, many around the world breathed a sigh of relief. Any easing of international tensions over Iran is welcome....

Tehran released the British troops because it had achieved its political goals, not as a concession to international pressure. Iran's main foreign-policy motivation in seizing the sailors was to express defiance in the face of the latest Security Council resolution over its uranium enrichment program. When Tehran was offered a face-saving opportunity to suggest the British were arrested following an honest misunderstanding, it refused. The Iranians further upped the ante by broadcasting coerced "confessions" from their captives that Britain had been entirely at fault.

Clearly, Tehran is in no mood for compromise. Until the international community agrees on sanctions on the country's energy exports -- which isn't going to happen -- Iran will run more diplomatic stop signs and continue its nuclear development at top speed.

Indeed, why should they compromise? They can achieve their political ends with nary a consequence; build up their "honor" in the Middle Eastern world and expose the West to shame and humiliation--all without anyone standing up to them in any meaningful way.

We are not dealing here with a culture that appreciates honesty; or give and take; or even compromise. We are dealing with a malignant culture , steeped in sociopathy and shame-avoidant to the point of paranoia.

One of the ways that those who fear shame to this extent protect their fragile self concept is to subjugate those who are perceived as weaker. By doing so, they can rationalize that they are superior to those who they force to submit. In fact, this is the only way that "honor"can be maximized. Giving into them in any way; appeasing or compromising; even negotiating in good faith is perceived as weakness and leads to escalating bullying and aggression, because the are convinced they are our superiors--not our equals.

In a brilliant post today in which the creation of Israel and its impact on Muslim society is discussed, SC&A note:

The notion of equality between Muslims and non Muslims, to this day, remains incomprehensible in the Arab world.

This is no small matter. Irrespective of a non Muslim’s achievement, status, education, political or even social standing, every Muslim was superior to the non Muslim. Every Muslim could abuse any non Muslim as he saw fit, and for the most part escaped serious consequence. Leaders of failed Muslim nations and failed, backward societies needed to have their populations feel superior to something or some group, anywhere. It was always in their best interests to cultivate the weeds they would refer to as a garden.

We are trying to deal with leaders who have deliberately led their countries down a suicidal path; encouraging unparalled displays of paranoia, rage, envy and brutality. These are leaders who appeal to the worse aspects of human nature; who prefer their populations to be mindless and follow "the will of Allah"--and they will happily spell out for them exactly what that will is.

Gagdad Bob at One Cosmos once said, "Try telling your immune system to be reasonable, to sit down and talk it out with the viruses that want to invade you. Tell your white blood cells to hold conferences to try to understand the root causes of bacterial motivations."

Or how about negotiating and trying to compromise with cancer as it spreads through your body destroying every organ? Do you think you can reason with it? Do you imagine that, if you appease it by promising not to excise it or irradiate it, it will cease its quest to make you submit to its nature? Clearly, it's motivation is beside the point.

The Arab language, BTW, has no word for "compromise" as we understand it in the West (the closest concept is "bargaining". I don't know about Farsi). In Arab and most Middle Eastern cultural exchanges, there must always be a winner and a loser. Losing is considered shameful, and compromise, which the West is so fond of, is considered a form of capitulation; a surrender of objectives, principles, or matter, in the process of negotiating an agreement. When it comes to a matter of honor (or simply to avoid shame) the Iranians will lie, misrepresent, double-deal and do anything necessary.

And, for them, everything is a matter of honor. They must always perceive themselves as dominant and superior to the infidel, or it would be an unparalleled catastrophe-- both individually and societally. The humiliation involved would require some fundamental changes in the culture; and since that cannot be permitted to happen, no extremity of self-delusion is too much to prevent reality from ever penetrating their consciousness. And in that sense, the people that we are dealing with are not very different from the unicellular bacteria or mutant cells that spread malignancy.

That is why it is silly to say that Tehran is in no mood to compromise... 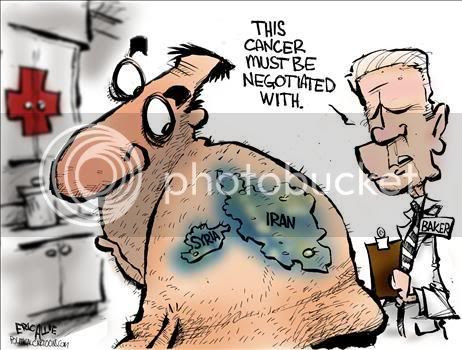