IRAN IS BUOYANT & THE WEST IS CATATONIC

Yesterday, there was this tidbit in the news:

Hardliners in the Iranian regime have warned that the seizure of British naval personnel demonstrates that they can make trouble for the West whenever they want to and do so with impunity.

The bullish reaction from Teheran will reinforce the fears of western diplomats and military officials that more kidnap attempts may be planned.

The British handling of the crisis has been regarded with some concern in Washington, and a Pentagon defence official told The Sunday Telegraph: "The fear now is that this could be the first of many. If the Brits don't change their rules of engagement, the Iranians could take more hostages almost at will....

"Iran has got what it wants. They have secured free passage for smuggling weapons into Iraq without a fight," one US defence department official said.

It is also clear that the Iranian government believes that the outcome has strengthened its position over such contentious issues as its nuclear programme. Hardliners within the regime have been lining up to crow about Britain's humiliation, and indicated that the operation was planned.

Conservative parliamentarian Amir Hassankhani, a former member of the country's Revolutionary Guard and supporter of the president, Mahmoud Ahmadinejad, told the country's semi-official Fars news agency: "The arrest and release of the British sailors proved that if Iran's issues and demands are overlooked at the international level, the Islamic republic can create different challenges for the other side."

In "Showdown at the U.K. Corral" I wrote:

Consider, if the leaders of the free world cannot respond appropriately and decisively to the latest Iranian hostage crisis (and you think they would remember the consequences of the last one--particularly on the so-called "legacy" of Jimmy Carter), then the crisis will only escalate. What Carter did (and didn't do) 25 years ago paved the way for 9/11 and the many crises we are dealing with today; what future horrors will the selfish and malignant pacifism of today's left pave the way for in the next decade?

The Mullahs are watching and have a great big Cheshire cat grin on their face. They almost certainly have concluded from the useless British and international response that they can get away with practically anything now.

The key behavioral factor in extinguishing undesirable behavior is never to reinforce the behavior you are trying to extinguish. This fact is essential to understand, particularly when dealing with bullies who hail from a shame-phobic culture. The desire to preserve honor and avoid shame to the exclusion of all else is one of the primary foundations of the culture, and it has the side-effect of giving the individual carte blanche to engage in wrong-doing when they believe they have the upper hand.

In fact, any and all attempts to placate or reason with them will only result in their behavior escalating. That is because they sense weakness; and your weakness presents them with the opportunity to maximize both their own honor (such as it is) and your shame.

Bullies and thugs will not suddenly develop respect for your profound desire for peace and your non-violent, even appeasing, intentions--no matter how sincerely you express them. On the contrary, they conclude that you are weak and that there will be no consequences if they continue to push you around.

I wonder if anyone remembers that Iran has a nuclear program that the West has vowed to stop? Certainly Iran now knows that they are dealing with a paper tiger.

Charles Krauthammer notes that multilateralism and turning to the "international community" to handle the bad guys in the world has been singularly ineffective:

The result is utterly predictable. Nothing has been done about the Iranian bomb. In fact, the only effective sanctions are those coming unilaterally out of the U.S. Treasury.

Remember the great return to multilateralism — the new emphasis on diplomacy and "working with the allies" — so widely heralded at the beginning of the second Bush administration? To general acclaim, the cowboys had been banished and the grown-ups brought back to town.

What exactly has the new multilateralism brought us? North Korea tested a nuclear device. Iran has accelerated its march to developing the bomb. The pro-Western government in Beirut hangs by a thread. The Darfur genocide continues unabated.

The capture and release of the 15 British hostages illustrate once again the fatuousness of the "international community" and its great institutions. You want your people back? Go to the EU and get stiffed. Go to the Security Council and get a statement that refuses even to "deplore" this act of piracy. (You settle for a humiliating expression of "grave concern"). Then turn to the despised Americans. They'll deal some cards and bail you out.

Of course, we can count on the Democrats to try to prevent America from doing any such thing, because when it comes to being fatuous, the rest of the international community has nothing over them.

No matter how you look at it--either from a behavioral or a psychological perspective--it seems clear that things are only going to be going from bad to worse in the immediate future.

I really wonder what it will take before the West wakes up; and sometimes I worry that we're not simply asleep, we're catatonic. 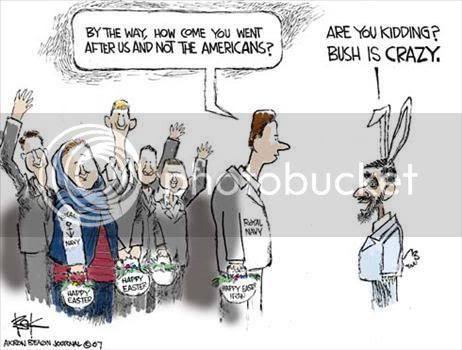