OUR SWORD AND OUR SHIELD

The following letter (via Michael Ledeen from The Corner) should make any American feel awed by the incredible people we have serving in our military:

It is rather for us to be here dedicated to the great task remaining before us - that from these honored dead we take increased devotion to that cause for which they gave the last full measure of devotion - that we here highly resolve that these dead shall not have died in vain. ~ Abraham Lincoln, Gettysburg Address

A few nights ago, I walked a quiet mile with hundreds of other service members. It was a clear night in Bagram, Afghanistan. Although it was late, the birds were singing, perhaps roused by the unusual occurrence of people walking under their trees at the late hour. Soft voices broke the solemnity, but no words were discernible. Suddenly, as if on cue, soldiers, airmen, seamen, marines, broke off the sidewalk and lined the road, spacing themselves regularly and assuming a position of silent watchfulness. The honor cordon had formed.

Heads began to turn right as flashing blue lights appeared far down the road. As the vehicles neared, one by one, service members assumed the position of attention and rendered the hand salute. In the back of an open truck sat eight military members, and between them, at their feet, was a flag draped casket.

As I rendered my salute, I thought about the fallen soldier. I did not know his name, his unit or his home. I never saw his face or spoke to his family. I did not know why he volunteered for the Army or what he was doing when he was killed. But there was much I did know. I knew he had fought and died in an honorable cause, a cause that had little to do with our policy on Afghanistan. This soldier had volunteered to put his very life on the line in service to his nation and his brothers-in-arms. I see no more honorable cause that that.

In a column, Mr. Putney has again raised the debate about the sacrifice of America's "sons and daughters" in uniform. Some have argued that we must continue the fight to honor their memory "so that they have not died in vain." Others argue we must stop the wars to save soldiers from this fate. I think an essential understanding of what motivates those of us in uniform is missing in this debate.

We are not your sons and daughters, whom you must protect and defend. We are your sword and your shield. We are men and women who volunteer to place our lives on the line so you do not have to. We do not decide when or where we will be sent. We go. You are our advocates, not our parents.

We trust you to care for our families, to hold our jobs, pay for our equipment, salary and medical care and yes, to honor our sacrifice. We trust you to vote for good political leadership, to speak out against bad policy decisions and to demand public accountability. However, we do not count on you to explain the honorable character of our service. We are ennobled by the very fact we serve.

Our "high moral cause" is one of service to a nation whose principles we believe in. We miss the point of political debate when we distill it down to numbers of service member deaths. Debate should be about the policy that leads us in or pulls us out of war. I, as a soldier, am personally insulted when debate about war becomes not about policy, but about deaths, because it implies that my service is at best uninformed or ill-conceived, and at worst valueless.

I know my life is in the hands of others because I choose for it to be that way. I am not your daughter, a child who must be guided. I have made my choice and pledge my honor to it. I will thank you to remember that because we serve our nation, none of us dies in vain, regardless of the cause; end of debate.

Every day a new Marine enlists or an airman puts on her uniform is a reminder that our defenders come from people who still believe in our nation and the values it aspires to, as flawed as we sometimes are. War does not make our sacrifice honorable, death does not make our service honorable; service itself is our honor.

We, your American service members, do not see the cause for which we may give our last full measure of devotion, as our nation's goals in Iraq or Afghanistan, and perhaps that is the difference. Our cause is our nation, in all her beautiful, imperfect glory.

So on a dark night in Afghanistan we stood under a velvet sky of a million stars to honor one man who lay under 50. We never doubted what he died for. Pfc. Patrick A. Devoe II died for you, the United States of America. That, Mr. Putney, is no goof.

Sarah Albrycht is a Bennington native serving in the Army in Afghanistan.

The most striking part of this amazing letter is the following:
We are not your sons and daughters, whom you must protect and defend. We are your sword and your shield. We are men and women who volunteer to place our lives on the line so you do not have to. We do not decide when or where we will be sent. We go. You are our advocates, not our parents.

There are those in this country who insist on treating our service men and women as children; or as helpless victims who must be constantly shielded from the consequences of war and military action. Sadly, these are the same people who on the other side of their mouths are quick to describe the same warriors as sadistic killers who thrive on torture and cruelty.

The inability to understand that these are adult men and women who have made a conscious choice to do what they do; and that they are content and proud of that choice; is something those who alternately infantalize and demonize them are unable to appreciate because of their ideologically addled thought processes.

The Marxist dialectic be damned; these are people of integrity who do not avoid personal responsibility and committment; who do not frame their lives in terms of oppressor or oppressed.

This one woman, Sarah Albrycht, with her simple words and shining self-confidence and pride, inspires within me more confidence that my country is in good hands than any one of the elite members of Congress; or, for that matter than our current rhetorically "gifted" but ethically challenged, pseudo-messianic Commander-in-Chief. 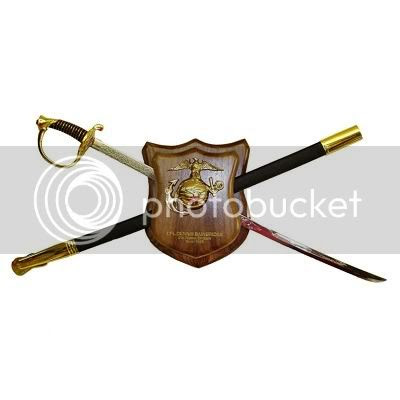