MAJOR SUCCESSES OF THE FIRST 100 DAYS !

Forget the economy...our new president has achieved several major foreign policy triumphs in only his first 100 days in office! First, there' the significant change he's mad in our image abroad: 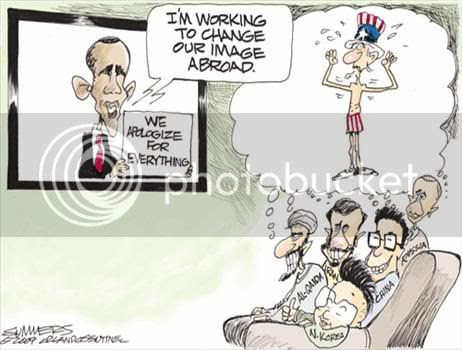 Then, there's the advances in prosecuting the war on terror overseas contingency operations: 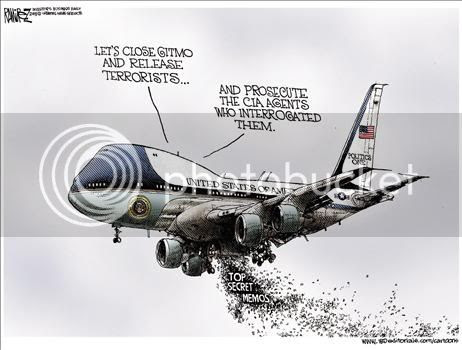 Without a doubt, both of these courageous actions have made America safer. I mean, I feel safer, don't you?

I have discussed the Democrats' and Obama's fundamental psychological strategy in a previous post, but it is worth revisiting, because even I did not appreciate how desperate they were to "undo" the last 8 years and revert back to September 10, 2001.

In fact, they are in an absolute frenzy of undoing, and the smell of hysteria is overwhelming.

This hysteria is absolutely essential for them to be able to remain on the [psycho]path of denial: the Democrats and the left have staked so much--their entire self-concept, in fact--on losing in Iraq and the evil of George Bush and the Republicans, that they cannot be satisfied with merely winning the Presidential election. 'Hope and Change' was just a motto for them, it was the only way they could continue to keep their eyes closed.

This is emotional excess that disguises a severe, disabling anxiety; an anxiety that has been tenously held in check by the psychological denial that came before. It is as if the bizarre national depression the media have been hyping for the last eight years suddenly flipped into a full-blown mania--with all the euphoria, grandiose ideas and plans, delusions of grandeur, wildly impulsive spending, irritability and inappropriateness one sees in an acute manic episode.

It is the Greek temples and the Obama Presidential Seal to the nth power. And it is symbolic of the lengths to which many in this country, led by the political left and the Democrats, will go to in order to maintain their psychological denial at all costs so so as to continue to be oblivious to the danger in our world. They will even go so far as to erase any evidence of events that have transpired since the beginning of the millennium when Bush took office and including 9/11--especially 9/11--so as to pretend they never happened.

They will simply 'undo' the last 8 years; rewrite the history and take us across the bridge back to the 20th century.

UNDOING is a psychological defense mechanism in which a person attempts though contrary behavior to ward off threatening thoughts or feelings. Undoing can also be a convenient way to 'explain away' habits or behaviours that are not considered in line with an individuals' (or group's) personality; and, finally, by using the defense of undoing, one can rid oneself of gnawing feelings of guilt by compensating the injured party either symbolically or actually. Undoing can be thought of as the behavioral component of reaction formation, a psychological defense in which any unacceptable thoughts or feelings are turned into their opposite.

The Democrats and the left have a lot of undoing to do. They must, in short, wipe the Bush Administration off the map; as if it never existed. Because if they do that, they can go back to pretending that there is no real threat from terrorism--only from BusHitler and Darth Cheney.

UPDATE: Obama = Carter on steroids ? I'd say he's more Carter on stimulants, which would explain the mania and the latent paranoia.
Posted by Dr. Sanity at 7:38 AM