DO YOU BELIEVE IN MAGIC ?

The current Administration seems to.... 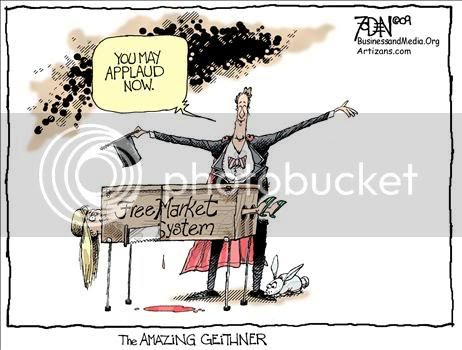 (With apologies to The Lovin' Spoonful]

Do you believe in magic in Obama's heart?
How he'll fix the market cause he's just so smart;
And it's magic, and Geithner is groovy
They make you feel happy like an old-time movie
They'll tell you 'bout the magic, and ensnare your soul...
Have you tried to tell a leftist 'bout self-control?

If you believe in magic don't bother to choose
Between capitalism or the socialist blues.
One creates wealth and other just loots;
One walks in freedom; the other, jackboots.
Your feet start tapping and you can't seem to find
How you got there, so just blow your mind

If you believe in magic, then believe in Barack
Each time he speaks, the market plummets in shock;
And maybe, if it drops far enough
He can show you his muscle and really act tough;
Then He'll go regulatin', baby, on a whim
Cause the magic's in Barack and you gotta believe in Him!