HOW THE WEST WAS LOST 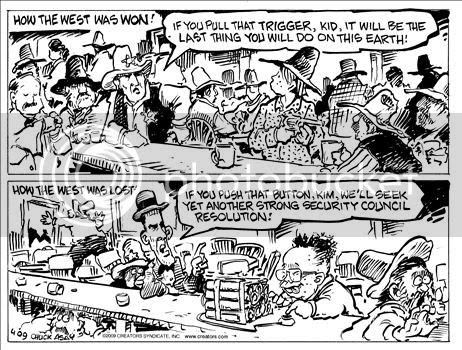 Will the Security Council act today???

And, if they do manage to finally come to some useless consensus...so what? Is there anybody on the planet who thinks that North Korea cares what the UN does at this point? Kim Jong Il took a chance on O and has known for several days that he was going to get away without any consequences; and, not only that, he now can bask in the sublime knowledge that his reprehensible behavior has brought him the prestige, status and attention that he so desperately craved.

Way to go, O! That new smart diplomacy thingy in action, I presume?

But let us distinguish popularity from respect or even credibility. Take Europe: they are going to send combat troops to Afghanistan (not); stimulate the world economy (ask Ms. Merkel); have their transnational financial czar (so says Mr. Sarkozy), help stop Iran or North Korea (will we?)? Try Russia: they now like us too, since we did what? Stood firm on missile defense? Suggested moderation on energy blackmail? Asked to show deference to the former Soviet republics? Suggested Putin stop murdering dissidents abroad?

Given the world’s cheap moralizing, could not Obama have just voiced one thought? Try: “It is easy to fault President Bush for much of the ill-feeling toward the United States. That is too facile an explanation. As a global leader with often conflicting world responsibilities, America is presented with bad and worse alternatives and our choices simply will never please everyone.” That would be true and honest, given that Obama trashed Bush, but kept his Iraq and Afghanistan policies, and so far has not found any new solutions to old problems with Iran, North Korea and Russia.

The Big Guy does have some new solutions about saving the planet from global warming, though. Wretchard comments:

These guys are thinking of applying linear solutions to a complex problem they don’t even understand, to a system they can’t even model. Re-engineering the whole planet is the ultimate public works project; and is likely to cost untold sums. When the whole scheme comes a cropper, as it might, the unintended consequences may be incalculable. I happen think this is total madness, but that’s no reason it won’t happen. Maybe the crazier something is, the more likely it is to be embraced as conventional wisdom.