Nancy Pelosi is "pushing back" against charges that she was aware of -- and acquiesced in -- the CIA's harsh interrogations of terrorist detainees nearly from the moment the practice began, reports the Politico Web site. Maybe she's suffering from amnesia.

House Majority Leader Steny Hoyer and House Speaker Nancy Pelosi.
Maybe, for instance, the speaker doesn't remember that in September 2002, as ranking member of the House Intelligence Committee, she was one of four members of Congress who were briefed by the CIA about the interrogation methods the agency was using on leading detainees. "For more than an hour," the Washington Post reported in 2007, "the bipartisan group . . . was given a virtual tour of the CIA's overseas detention sites and the harsh techniques interrogators had devised to try to make their prisoners talk.

"Among the techniques described," the story continued, "was waterboarding, a practice that years later would be condemned as torture by Democrats and some Republicans on Capitol Hill. But on that day, no objections were raised. Instead, at least two lawmakers in the room asked the CIA to push harder."

Or maybe the speaker never heard what some of her Democratic colleagues were saying about legal niceties getting in the way of an effective counterterrorism strategy....

Or maybe the speaker forgot that after 9/11, the operative question among Americans, including various media paladins, wasn't whether the Bush administration had gone overboard. On the contrary:

"I asked the president whether he and the country had done enough for the war on terror," writes Washington Post reporter Bob Woodward in his book "Bush at War." "The possibility of another major attack still loomed. . . . Was it not possible that he had undermobilized given the threat and the devastation of September 11?"

Or maybe the hapless and forgetful Democrats are suffering from... hysterical amnesia.

Hysteria is a concept characterized by a wide variety of physical and mental symptoms that result from dissociating one's cognitive functioning from one's emotions and/or behavior. The psychological defense that makes this happen is known as dissociation.

For the hysteric, emotions are primary and are not subject to objective reality.

When we speak of someone becoming "hysterical" (a more recent term is "histrionic"), we are talking about behavior that exhibits overwhelming or unmanageable emotional excess.

Welcome to the Wonderful World of Feelings, nothing more than feelings (cue music); where there really is nothing more than feelings at play. This is a world where there is no objective reality or truth; a world where, if you believe something is true, then it is. A world where it is always acceptable to "forget" what you said or did yesterday, because that was then and this is now; and consistency, honesty, or integrity are for losers who believe in reason, truth and reality.

In other words, it is a world where something can be considered "fake but accurate" or where captured enemy combatants in the middle of a war are considered to be in a a "gulag"; where an Administration who heroically kept the American public safe from terrorist attacks for 8 years is demonized and threatened with prosecution; and where the Democratic Speaker can pretend that she didn't understand that being briefed on enhanced interrogation techniques by the CIA meant that they would actually use such techniques (she's simply shocked, shocked).

It is also a world where a "religion of peace" beheads people; is so terrified of women's sexuality they must "liberate" them by forcing them to wear sacks over their bodies; and which promotes blowing yourself up in a crowd as a devout religious act.

All these things are examples of how emotions can be cut off, or dissociated from cognition and the rational process; and when that happens, some very curious things begin to happen.

Specifically, a variety of altered states of consciousness may result from the dissociative process, particularly when there is little insight or self-awareness. In one dissociated or hysterical state, sleep-walking (sonambulism), the person appears to be out of contact with his environment, is seemingly unresponsive to external stimuli, and in many cases appears to be living out a vivid, hallucinated drama. That particular emotional state essentially describes today's political left and Democratic party as they have sonambulated through the events taking place in the world of the 21st century. Or, consider hysterical amnesia itself, which differs from organic amnesia (i.e., brought about by physical trauma or disease) in that it relates to only particular memories or groups of memories, often of direct or indirect emotional significance. It's origins are causally connected with the sufferer's own needs and conflicts.

Sounds like an excellent diagnostic fit with Pelosi's symptoms, doesn't it?

Another general effect of amnesia (of any etiology) is the inability to imagine the future. And, isn't that what the hysterics on the left were initially screaming after 9/11? That Bush had not been able to "connect the dots" and predict that terrorists would use airplanes to attack us? Well, it is absolutely impossible to connect those dots when your cognition is conveniently anesthetized so you can emotionally wallow in your virtuousness.

Mass hysteria occurs when large groups of people engage in psychological dissociation; and political mass hysteria is the most appropriate name when all the emotional excitability and excess happen to serve a political function or ideological agenda.

Most political theater is extremely histrionic--appealing to the emotions (usually the most base ones -- like envy, greed, fear etc.) Drama of any sort suits the hysteric's modus operandi extremely well. The drama is designed to mask the fact that the individual is in psychological denial about some aspect of reality; and, as I have written before:

At the center of all psychological denial is a hidden agenda. That agenda is usually not completely conscious--meaning that the denier has not thought through the issues surrounding his denial; and may not even be aware of what his motivation is in asserting something is true when it isn't; or false when it isn't.

The war rests in the realm of emotion, warped by the hysteria of partisan bickering.

The result is that we have forgotten why we invaded Iraq in long-ago 2003. We cannot agree why we had problems after the stunning removal of Saddam Hussein. And we are not sure either whether we are winning — or why we even should....

Some of the critical points made by Hanson in that earlier article, demonstrate clearly the circumscribed memory loss that the Democrats and the left had then, and now, which are clearly the result of their own conflicts and needs; and which is driven by their ideological agenda:


Now, we can add to Hanson's points by adding that even though key Democratic leaders were briefed about the Administration's efforts to appropriately interrogate terrorists for crucial information to prevent future attacks--they have conveniently forgotten something they conveniently didn't want to remember.

You've got to wonder what planet the Democrats have been living on?

And I should point out that it doesn't even take a psychiatrist to notice the hysteria and exaggerated emotionalism that emanates from the left side of the political spectrum these days--untempered by rational thought even after they have been politically victorious.

One of the more absurd complaints leveled against President Bush during his tumultuous tenure in office is that, in combating terrorism, he's eviscerated the Constitution. This hysteria is not confined to critics in the blogosphere or strident left-wing magazines such as the Nation but is found, as well, in mass-market newspapers and magazines. A citizen who reads, in a vacuum, editorials and oped columnists in the New York Times, say, might believe that since September 11 America, led by the Bush administration, has become a police state

Anyone whose cognitive faculty is not completely shut down and who spends any time observing the behavior of the left can appreciate the unnatural emotionalism and the frenzy that is driving them. Winning the White House and a majority in both houses of the Congress has done little to temper either their rage or their other destructive emotions.

When it comes to a discussion of National Security, this histrionic post demonstrates exactly why it has been impossible to engage members of the political and consistently lunatic left in any sort of rational discussion.

It's like trying to dicuss responsibility with a self-indulgent and overly dramatic adolescent girl.

The angry teenager who just hates it when she doesn't get her way, is particularly enraged when Mommy (usually on her side) goes along with Daddy; and we see that same dynamic rather frequently these days, as the narcissistic left raises the decibel level of their pouts and whines whenever their will or their world view is thwarted.

None of the rhetoric has anything remotely to do with reality; but all that is necessary for the left is to feel intensely that something is so, and for them it is.

Under Bush we were living in a police state that tortured poor innocent terrorists! Bush is still Hitler and to blame for everything that might conceivable befall the US under Obama! Christian whackjobs are trying to impose a theocracy on America! We, the poor oppressed left are being persecuted (even though we are now the ones in power we still retain the right to 'speak truth' to power and will crush any attempts to criticize us)! Blah blah victims blah oppression blah blah fascist Republicans blah blah blah! And so on and so forth.

Engaging in "self-delusion" is the act of deceiving one's self about some aspect of reality. Self-delusion is probably the most critical cognitive "skill" a prospective political hysteric must cultivate.

And Pelosi, the Democrats, and the left are all extremely talented in this area. 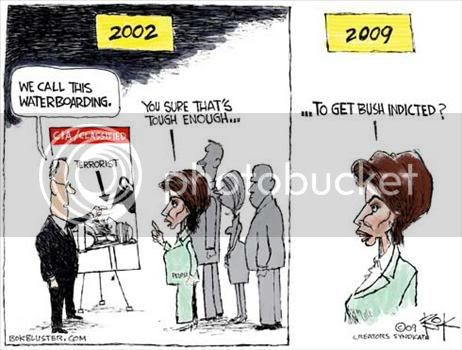