THE NUB OF THE CRUX OF THE GIST OF THE PROBLEM

Gagdad Bob tackles the Big Metaphysical Question of the Day:

There is no question that reality is "ambiguous" and subject to multiple interpretations. However, that should not be taken as an excuse to believe that all interpretations are of equal value. Nevertheless, this latter belief is the hateway drug into the various pneumapathologies of the left, e.g., multiculturalism, moral relativism, the "living Constitution," etc.

Again, if there is no objective way to arbitrate between competing versions of reality, then it comes down to a matter of raw power. Or, as Obama put it, "I won."

This is obviously how political correctness has slithered its slithery way into every corner of reality. In the world of political correctness, it is always 1984. Take the example of Miss California. Because even beauty pageants are run by tyrannical leftists, all points of view are of equal validity. However, if you voice the incorrect truth, then you are punished. You see? Perfect nonsense -- not the liberating kind, but the oppressive kind, AKA hell.

And it is hell, quite literally, for hell is anyplace that is beyond the rule of reason -- where reason, quite simply, does not apply. It is a world in which a person cannot simply say, "b-b-b-but a man can't marry a man. It's impossible."

Actually, it is possible, so long as you create an impossible world. And the world of the left is most assuredly an impossible world, since it is literally detached from its source, its archetype, its origin, and therefore its purpose. To put it even more simply, the "absolutely relative" is an ontological impossibility, and is therefore guaranteed to generate absurdity.

This metaphysical confusion which trashes objective reality and truth has all sorts of consequences, because all the branches of philosophy are dependent on Metaphysics, which describes existence. Metaphysics leads directly to Epistemology, which concerns itself with knowledge.

The answers derived from these two branches lead directly to the Ethics (how should we behave?) that one chooses to adopt and to the Politics (what degree of force is permissable?) that one practices.

For those of you who think all this philosophy business is too abstract and irrelevant to your life; you are very very wrong. Catastrophically wrong.

These ideas have everything to do with your life and how you live it. They are also the crux of why the world we live in seems to be more and more incomprehensible and insane. When you start off with the belief that reality doesn't exist outside your own head, then, it is just a very short--and minor--leap to accepting that words don't matter and can change meaning; or that it doesn't matter how you behave; that everything is relative anyway, including truth and morality.

But, as Bob points out, just because reality is ambiguous and sometimes difficult to determine; it hardly gives us carte blanche to say that every interpretation is of equal value and should be treated as such. That way lies madness...and madness is exactly what we are dealing with in today's world. 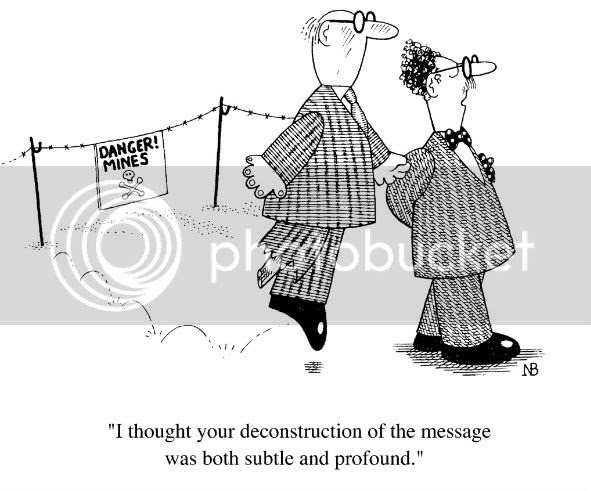