A 3 month old video produced by the Boston Globe describing the effect of Barack Obama’s housing reforms in his district makes interesting viewing. The accompanying article explains that “the squat brick buildings of Grove Parc Plaza, in a dense neighborhood that Barack Obama represented for eight years as a state senator, hold 504 apartments subsidized by the federal government for people who can’t afford to live anywhere else. But it’s not safe to live here. … In 2006, federal inspectors graded the condition of the complex an 11 on a 100-point scale - a score so bad the buildings now face demolition. Grove Parc has become a symbol for some in Chicago of the broader failures of giving public subsidies to private companies to build and manage affordable housing - an approach strongly backed by Obama as the best replacement for public housing.”
[...]
It isn’t that people are thrilled with John McCain. It’s that not many trust Barack Obama either.

Then, watch the video sent to me by a reader which is loaded with interesting facts:


And it's my bet that a lot of people would trust Obama even less--if more people in the media were out doing their job and reporting on the facts about what is behind the current economic crisis-- instead of reporting on the numerous, daily popularity polls. But a most of the media has erected a firewall where Obama is concerned and prefer to look the other way at anything negative about him.

Obama talks regularly about the "failed economic policies" of the Bush Administration. But the 'failed policies' he is talking about derive from the same old Democratic talking points we've been hearing about for the last half century. The Democrats have spread their poor business practices to even the business community, who with their usual flair, took the ball and ran with it. They were told they could be as virtuous as the Democrats by embracing a business model that ignored reality. Both sides of this little conspiracy were very good at ignoring reality and scratching each other's backs.

I'm not saying that Republicans are blameless. Hardly. But Obama and the Democrats are in this crisis up to their necks and they, with the help of a protective and obfuscating media are going full out in their denial of responsibility, marching around Washington like a bunch of incompetent Sergeant Schultz's intoning, "I know NOTHING! NOTHING!" 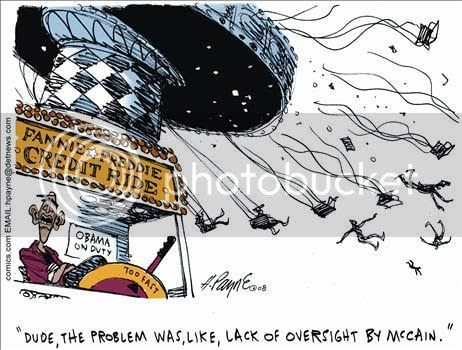 [cartoons by Henry Payne]
Posted by Dr. Sanity at 6:45 AM