My daughter and I spent yesterday afternoon in Sterling Heights, Michigan where John McCain and Sarah Palin stopped to rally voters. Freedom Hall, an outdoor amphitheater was more than packed, and the crowd was completely wild for Sarah Palin. This was the event that my 15 year old daughter wanted to go to. Except for the painfully loud rock music they played while we waited for the Presidential and Vice Presidential nominees to arrive, it was pretty inspiring. Several veterans who were POWs along with McCain got up to tell their story; as did a Detroit businesswoman who had been a Democrat all her life, but planned to vote for McCain.

The enthusiasm was very contagious, and the crowd got to hear reprises of portions of both candidates convention speeches. Palin was surprisingly charismatic. I mean you got that impression watching on TV, but in person you can see that her impact is at least doubled. She was presented with a Redwing jersey (see picture below).

My daughter and I were in the 8th row of this sea of humanity, so we were very close to the action. I came to see Palin, but I was also very very impressed with the realness of John McCain, who seems the unlikeliest person in the world to be a star and the recipient of so much adulation from so many people. I have to say that he seems a bit dazed by it all, too.

Participating in an event like this makes me realize how easy it is for these candidates to fall into the narcissistic trap that characterizes not only real rock stars and Hollywood types, but also most of our puffed-up politicians who--after being worshipped uncritically from afar and surrounding themselves with worshipful, glassy-eyed followers--begin to think of themselves as saviors and deities or some such nonsense.

The overweening ego that fancies itself a Messiah of some sort or another in such circumstances seems to be the rule, with very few exceptions. So far, neither McCain nor Palin come across that way. And I think their celebrity--especially Palin's recent rise in the public consciousness--is born of the fact that they come across as very human. I don't think that impression is calculated or cynical on their part.

They are what they are, and are proud of it. A bit awkward; a bit less polished then you might expect; they both share the type of inner confidence born of knowing who they are and what they stand for. They both share the characteristic attitude of people who don't just say what they intend to do--they actually do what they say. This trait comes from some inner integrity that ties words to actions. It is a trait you can see in all men and women of action. In fact, their words are generally far less impressive than their deeds.

As a psychiatrist, I am always wary of those (particularly politicians) who glibly talk and talk and talk, always promising you the moon. Talking is no real risk for these walking narcissists. Doing what they promise is what is hard, because their promises are not based in reality to begin with; and they often ignore the less immediate consequences of their pandering to one group or another. The primary goal of such persons is merely to increase their adulation quotient--i.e., to feed on the adoration and worship of those to whom they make promises. Some of them actually believe they can do the things they say. Some could care less. They live for the kind of excessive self validation they crave, because without it they are nothings, zeroes.

To some extent, all politicians are guilty of this sort of behavior and we the public can easily get sucked into the lovely fantasy world where their very large ego resides. Healthy narcissim means you don't automatically believe your own press and are conscious of your own imperfections.

Having seen both of them in person, I am satisfied that John McCain and Sarah Palin live in the real world. I hope they will stay firmly entrenched in that world. 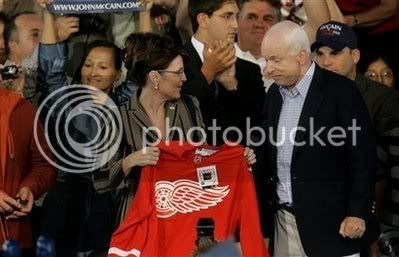