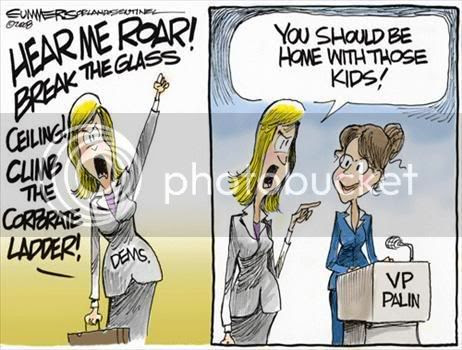 The Anchoress has a comprehensive roundup of Palinsanity.

Victor Davis Hanson has this to say about Palin this morning:

Much has been written why Palin both brings strength to the McCain ticket and is a gamble at the same time. Why then the growing wave of popular sentiment in her favor?

Various reasons, but one I think is that millions of Americans are simply tired of being lectured at by smug elites. Jetting Al Gore made tens of millions finger-pointing at us about our global warming. Obama's America, apparently unlike Rev. Wright's Trinity Church, is a cruel, downright mean and dysfunctional place. John Kerry's United States is one of the half-educated in need of Ivy-League enlightenment and tutorials.

So along comes someone (unlike Biden's vastly inflated middle-class biography) who really is from the working class. She likes it—and finds snowmobiling, hunting, fishing and living in small-town America not as a wasteful use of carbon-emitting fuels, cruelty to animals, gratuitous depletion of our resources, or proof of parochial yokelism. Instead it is a life of action in an often harsh natural landscape, where physical strength is married to intelligence to bring us food, fuel, and progress.

Palin's symbolism is the antithesis of the metrosexual wind- or body- surfing politican, and hair-plugged, neurotic TV pundit So at this time, right now, millions apparently like Palin's atypical 19th-century profile. Again, it's a pleasant change of pace from Harvard Law School, DC politics, "community organizing" and the can't-do, 'they raised the bar on me' collective complaint.

If she can beat off the frothing Newsweek/MSNBC/New York Times inbred rabid wolves, and do it with the grace she has shown so far, she will fill a deep yearning among Americans for someone like her. A lot of Americans, if they watch reality shows, prefer truckers on ice or Bering Sea crab fishing to endless psychodramas of thirty-something suburban whiners.

So apparently they are eager to see a rare politican who is unapologetic about America's past achievements (cf. Obama's "tragic history" and need for more "oppression studies"), and who reminds us with pride that a muscular world of action, not community organizing, creates the bounty that others use and take for granted but so often sneer at the methods of its acquisition.

Right now, there are millions rooting for her in a way not true of Biden—and many who are criticizing her don't have a clue why that it is so.

Along those lines, my completely apolitical daughter--who puts her hands over her ears when I get going on any topic remotely political and chants "lalalalala"--asked me this weekend if we could go see Sarah Palin and John McCain when they were in Detroit later this week. I was so astonished, I almost dropped the plate I was carrying to the dinner table. When I asked her why, she told me she was very excited about Palin being the vice presidential nominee.

What the Democrats and the media are doing to this woman and her family is absolutely unbelievable. I have to agree with Glenn Reynolds when he suggests that: "How they could have kept the Palin pregnancy out of the press: Leaked it that John Edwards was the father."
Posted by Dr. Sanity at 6:44 AM