Palin's pick was a hand grenade tossed into the old-fashioned feminist movement's aged and tottering hulk. "Can someone please tell me what the hell happened?" pled Michelle Cottle of the New Republic, as Sarah made landfall. Well, here is one answer, as George Jonas put it in Canada's National Post: "The office for which Hillary Clinton strove with merciless determination for a lifetime, only to see it snatched away from her in the 11th hour, could fall into the lap of Sarah Palin, a populist outsider, who hadn't prepared, or even looked, for the job." The horror. "A slap in the face to all women," Cottle called it, especially to "any woman who seriously supported Hillary in this race." Much more was coming, in much the same tone. "I find it insulting to women, to the Republican Party, and to the country," said Sally Quinn in a Newsweek/Washington Post blog. In the Baltimore Sun, Susan Reimer found Palin's selection "insulting on so many levels" that she barely could name them. Ruth Marcus, reading from the same cue cards, sputtered in the Washington Post: "I found Palin's selection .  .  . insulting." Google the phrase "Palin's pick is insulting to women," and you come up with 943,000 entries. Is this a plot or a stunning coincidence? Or possibly both?

At the same time the Quinns and Marcuses were declaring themselves affronted beyond all endurance, and declaring that women were far too independent, too diverse, and too clever to move as a
herd in any direction; they were also asserting, on behalf of all women, that all women would surely reject this cynical, ham-fisted ploy. How stunned they must have been several days later when polls showed a move to McCain by white women and by independents. How could this have happened?

McCain's hand grenade has exploded the rot at the core of today's feminists; and by exposing the inner emptiness of feminism, she has also torn apart the center of all the victimhood/identity politics that have driven the Democratic Party for a generation. The Party of Nothing--with all their pious intonations about victimhood and diversity; hope and change--stands before us in the pseudopersona of the Obamessiah and his dedicated minions, who will do anything for him (see previous post about the coordinated smear campaign against Sarah Palin).

Meanwhile, Sarah continues to draw in the crowds and revitalize the Republican conservative base. How frightening that must be for the "progressives" of the left.

A few months back, Wretchard made an excellent case for the idea that progressive politics had come to resemble extremist politics:

The principle followed by kidnappers in Baghdad who sent five severed fingers belonging to "four Americans and an Austrian taken hostage more than a year ago in Iraq" was that if you want to be taken seriously you have to demonstrate how far you are willing to go in order to get what you want. And although neither Barack Obama nor Hillary Clinton have sent anyone actual severed fingers yet, both have amply shown their astonished supporters that they are willing to ignite race war, tear the Party apart or engage in political cannibalism to serve their own individual ambitions. What's really awesome about Hillary and Barack is not their resumes but the lengths to which they are willing to go....

Plausible deniability. Severed political fingers. These tactics are not a demented application of rational rules but the rational application of the demented rules of left-wing politics. The problem with the axiom "by any means necessary" is that it means "by any means necessary". Neither Hillary nor Barack have lost their sanity. But the rules themselves have been taken to their own inevitable conclusions.

It will be amusing to watch how much lower the Democratic Party of the United States can sink in its quest to regain power.

At the time, I only half-jokingly suggested:

What next, Democrats? An Obama photo-op with Zawahir? Honorary membership in your party offered by Pelosi to Bin Laden or Ahmadinejad? How about a friendly dinner hosted by both Hillary and Barack to celebrate the positive uses of exploiting racism and sexism for personal gain in American politics ?

Let me cut to the chase. I've said it before, but never has it been so obvious. The Democratic Party has lost whatever anchor it once had in the real world and is blowin' in the wind. It has become the party of nothing; led by vapid nothings, who stand for nothing.

If their insane behavior weren't so predictable based on inevitable outcomes of the 'principles' they pretend to espouse, it would be quite painful to watch.

I will concede, however, that the meltdown is a rather delightful viewing experience. 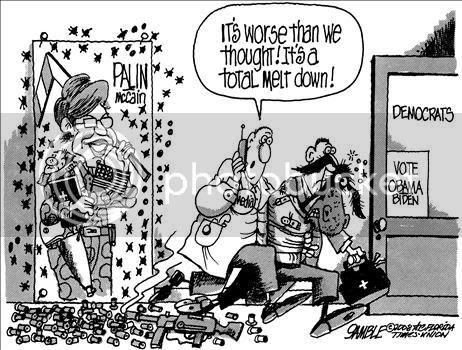