There are two important posts today on the relationships Barack Obama has with terrorists.

The first post briefly summarizes the thorough Stanley Kurtz article (which should be read in total) on Barack Obama's radical ties to unrepentant terrorist, William Ayers and the Chicago Annenberg Challenge (CAC):

* Obama had a long-term working relationship with William Ayers.
* The Chicago Annenberg Challenge ("CAC"), the only executive experience on Obama's resume, was an objective failure despite the expenditure of millions of dollars.
* Through the CAC, Ayers and Obama financed radical organizations, including one with a history of engaging in voter fraud.

Stanley's work is a challenge to mainstream journalists. A candidate for the presidency has a demonstrated working relationship with — indeed funded — an unrepentant terrorist, yet the media have spent more time reporting about Sarah Palin's hair styles.

The second post at The Belmont Club, continues Wretchard's investigation of Obama's relationship with Tony Redzko and Nadhmi Auchi, the latter "an Iraqi billionaire who has played a role in the Iraqi-European arms trade for over two decades, and who, behind the facade of legitimate business, served as Saddam Hussein’s principal international financial manipulator and bag man." (see also the first post on the subject: Obama’s Shifting Positions in Iraq: a Rezko Connection? )

The London Times reported that Auchi gave a $3.5 million loan to Mr. Rezko in May 2005 through a Panamanian company linked to the Iraqi expatriate called Fintrade Services SA. Several weeks after the loan, Mr. Obama purchased a house on Chicago’s South Side and Mr. Rezko’s wife bought an expensive plot of land next to the house from the same seller on the same day. Mr. Rezko’s wife later sold a 10-foot section of the property to Mr. Obama, to add to the Illinois Democrat’s garden. Mr. Obama has called the land purchase a mistake”

The Inspector General’s report makes the fairly persuasive case that Auchi was bad company. The person who constituted the single degree of separation between Auchi and the man who is possibly the next President of the United States was Tony Rezko. After the Chicago businessman’s conviction on corruption charges, Obama expressed shock at his former friend’s secret life.

Rezko’s guilty verdict on 16 of 24 corruption counts could have broad repercussions for Blagojevich, who made Rezko a central player in his kitchen cabinet. It could also prove a political liability for U.S. Sen. Barack Obama, who once counted Rezko as a friend and fundraiser, as the likely Democratic presidential nominee heads into the general election campaign against Republican John McCain.

“I’m saddened by today’s verdict,” Obama said Wednesday. “This isn’t the Tony Rezko I knew, but now he has been convicted by a jury on multiple charges that once again shine a spotlight on the need for reform. I encourage the General Assembly to take whatever steps are necessary to prevent these kinds of abuses in the future.”

Wretchard goes on in quite a bit more detail; then asks the extremely pertinent question: "What brought Auchi to Chicago? And what brought Rezko to Iraq? There are still lots and lots of places besides Sarah Palin’s tanning bed where the spotlight needs to shine."

But pertinent questions are actually considered impertinent by today's absymally uninquisitive and remarkably partisan mainstream journalists, who appear to be willing to overlook anything the Holy Obama has done, preferring to focus on the hairstyles, tanning beds and other inconsequential 'scandals' of Alaska's extremely popular Republican governor and vice presidential nominee.

The last thing they want to do is shine any kind of light on Obama's terrorist connections. Such a light would be far too blinding for the eyes of his worshipful supporters (including the journalists) to bear. 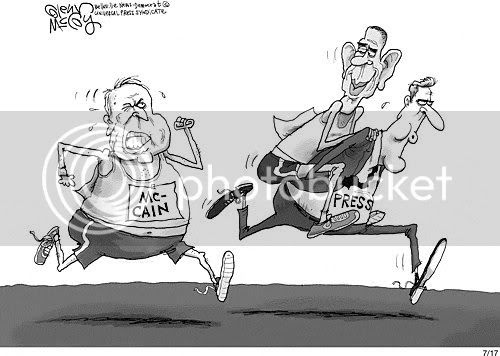