WHO KNOWS WHICH WAY THE WIND BLOWS ?

Since bad news alone is news from Iraq, there is now very little about the war on our front pages or the evening network lead-ins.

But as House Majority Whip James Clyburn (D., S.C.) presciently warned last July, such good news could present a “problem” for antiwar Democrats. And now it has.

They invested in the failure of the surge, having successfully tapped into widespread public unhappiness over the absence of prior clear-cut victory. Some change in their position is now on the horizon and it won’t be the first time Democrats have had to adjust en masse....

As always happens in war, the pulse of the battlefield had changed again. By September 2007 things suddenly had become as good as they had suddenly gone bad in early 2006 with the destruction of the mosque in Samara. Yet, if the public — once angry over the bad news from Iraq — had forgiven the Democrats their initial flip-flops and forgotten those 2002 war speeches, they may well not be so kind this third time around. Voters will blame those who don’t bring them victory, but they will not support those who will defeat....

When the perception of Iraq changed unexpectedly from an unpopular quagmire to a brilliant recovery, replete with real heroes, the Democrats, like deer in the headlights, were caught frozen. After all, who wants to see next October attack-ad clips of an Iraqi politician praising the United States, or a quiet walk through smiling crowds in Ramadi juxtaposed with Senators declaring our defeat and slurring the savior of Iraq?

So what to do?

At first, silence followed for much of the autumn. No more pronouncements of defeat from Harry Reid; no more ads alleging treason; no more John Murthas thundering about war criminals in our ranks; no more orations from Sen. Durbin about our troops being Nazi-like; no more quips from Sen. Kennedy that we were the new Baathists at Abu Ghraib.

But where does all this leave us since one cannot remain entirely mum about one of the most transformative events in recent American history? If Iraq stays quiet, then the Democrats will have to make yet a third adjustment, either suggesting that a victory is still not worth the cost in blood and treasure (e.g., ‘how many children went uninsured while we wasted a trillion dollars?’), or that they are due credit for the turn-around (e.g., ‘our pressure got the necessary changes from the administration’). Ignoring or denying the good news is simply not a sustainable strategy.

It gets worse, since the Democrats are not quite sure of the permanence of the upswing from Iraq. Why make that third flip just yet, and give up a Watergate or Iran-Contra-like gift, especially when a sudden spike in violence might start the entire ying and yang all over again?

The Democrats are in a very real bind--one that they never in their wildest imaginings would come about. They have heavily invested in failure in Iraq and catered to the anti-American and lunatic fringes of the left while doing so. Suddenly, things don't look so good, i.e., they don't look bad anymore in Iraq. Even John Murtha has reluctantly admitted that "the surge is working"--though he had to quickly backtrack when fellow-Dems became hysterical at this rare moment of clarity on his part.

But such is the political oportunism of today's Democratic leadership. They believe in nothing (except power for its own sake); they stand for nothing; and having decided to live by the polls and, as Hanson points out, "mortgage lasting principle to transient popularity, then you become enslaved by them as well."

Look for them to do a triple backflip Kerry maneuver: They were for the war, then against it, and soon will be for it yet again. The intellectual and moral featherweights of the Democratic Party always seem to know which way the wind blows....

ADDENDUM (not entirely unrelated):
Oh, and while we're on the subject of hell freezing over (i.e., Murtha saying the surge is working); perhaps a snowball does have a window of opportunity in hell? (other cartoons by David Horsey here) 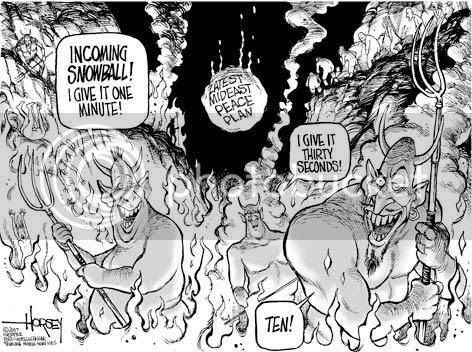 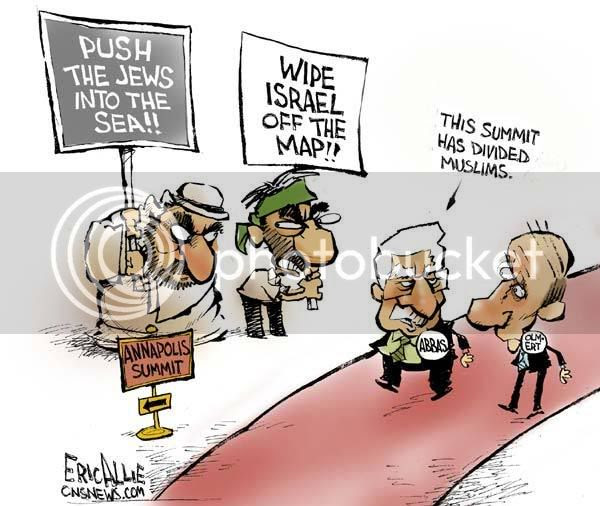 (other cartoons by Eric Allie here)
Posted by Dr. Sanity at 7:31 AM