OH LORD, WON'T YOU BUY ME A MERCEDES BENZ

The Iranians have found a creative use for their Mercedes trucks. 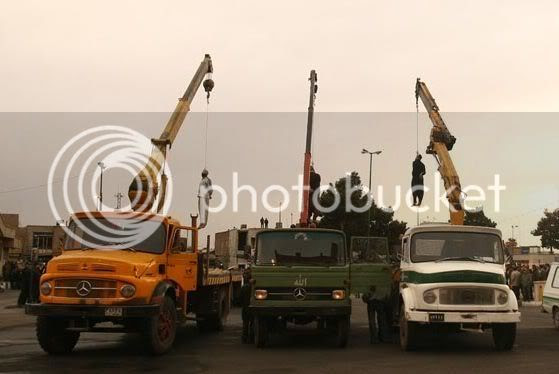 I'll bet Mercedes doesn't really care for the free advertising it gets in this photo, however. Do you suppose there will be an outraged leftist surge to boycott corporate evil? Probably not. There's never been any call to boycott computers (or cell phones for that matter) used by terrorists and their apologists.

Or, radio contests either.

Meanwhile, in a related story:

Germany expelled an Iranian diplomat in July after he tried to purchase equipment for his country's controversial nuclear program, a German news magazine reported on Saturday, Dec. 15.

The report, which the German weekly Der Spiegel released in advance of its publication on Monday, said the man was ordered to leave the country in July, but the case had not been disclosed until now.

The German Foreign Ministry declined to comment on the report.