John Hood praises Michael O'Hanlon (the person who dismayed fellow Dems by suggesting that the surge might be working), who he says makes a valiant effort to save the Democrats from themselves. So, what is O'Hanlon's argument?

Without a Democratic takeover of the Congress in 2006, there is little chance that President Bush would have acknowledged his Iraq policy to be failing and that Gen. David Petraeus and Ambassador Ryan Crocker would have been accorded the resources and the policy latitude needed to radically improve the situation on the ground.

Democrats were not the authors of the surge and in fact generally opposed it. But without their pressure, it probably never would have happened.

You would think that this idea--taking credit for Bush's turnaround in policy--would be a tactic jumped on ravenously by the Dems; but then, you might also think that an American political party would be invested in America winning the war in Iraq.

But that's just not the case. The Democrats--and in particular, their leftist base--are more concerned with their hatred of George Bush and they will never, ever admit that any policy promoted by him and his administration could possibly be working. Instead, they have all hitched their political wagon to a precipitously falling star and remain, even now, heavily emotionally invested in failure in Iraq.

And, as I noted the other day, they are also proactively invested in failure to halt nuclear arms development in Iran.

As a case in point let's look at Professor Juan Cole's "Top 10 Myths About Iraq", as Cole seems to be one of the most invested in insuring that the U.S. lose in Iraq and the war on terror.

10. Myth: The US public no longer sees Iraq as a central issue in the 2008 presidential campaign.

Cole cites this as a myth, and, indeed it is. The US public has always seen Iraq as a central issue in the 2008 campaign. It is the Democrats who now would like to make it a non-issue, and they are aided and abetted by the compliant MSM who have literally taken Iraq off the front pages since the war tilted in America's favor.

9. Myth: There have been steps toward religious and political reconciliation in Iraq in 2007.

Cole Check out this article. And consider this reality. If sunnis and shia don't get along (as they haven't for a few millenia) then what does Cole imagine is the cause? He tells us in #8:

8. Myth: The US troop surge stopped the civil war that had been raging between Sunni Arabs and Shiites in the Iraqi capital of Baghdad

In Cole's "informed" view the violence between the sects has surged with troop escalation. IT'S AMERICA'S FAULT THAT SUNNIS AND SHIA DON'T GET ALONG! Not Al Qaeda fueling the violence. Not Iran. Not their insane religious beliefs. I'm glad we've got Cole to make sure we understand these things.

Let's be clear, says Professor Cole. IRAN IS INNOCENT OF THE US CHARGES! THERE IS NO EVIDENCE! Cole ignores (or perhaps it is the usual hysterical blindness he suffers from?) this or this? We should ignore the Generals on the ground in Iraq who presented us with evidence in favor of Honest Juan who believes they are lying sacks of shit compared to the divinely innocent Iranian President?

6. Myth: The US overthrow of the Baath regime and military occupation of Iraq has helped liberate Iraqi women.

Iraqi women--indeed, any woman under the yoke of Islam in the Middle East--will hardly be free until their religion stops going backwards and decides to join the rest of modern civilization. If Cole is arguing that women had a great old time under Saddam and it was the US invasion/occupation that now has made things worse for them, then he should consider this:

Under the pretext of fighting prostitution, units of "Fedayeen Saddam," the paramilitary organization led by Uday Hussein, Saddam's eldest son, have beheaded in public more than 200 women throughout the country, dumping their severed heads at their families' doorsteps. Many families have been required to display the victim's head on their outside fences for several days. These barbaric acts were carried out in the total absence of any proper judicial procedures and many of the victims were not engaged in prostitution, but were targeted for political reasons. For example, Najat Mohammad Haydar, an obstetrician in Baghdad, was beheaded after criticizing the corruption within health services. (Amnesty International Report, Iraq: Systematic Torture of Political Prisoners, August 2001; Iraqi Women's League in Damascus, Syria)

There is a long way to go to "liberate" Iraqi women...and the first step was to get rid of Saddam. The fact that the West is burdened by the moral relativity of todays feminists and their male cheerleaders (like Cole) who righteously condemn the US for the plight of women under Islam, yet fail to notice that it is Islam's practitioners who enslave women and make "women's rights" a mockery.

5. Myth: Some progress has been made by the Iraqi government in meeting the "benchmarks" worked out with the Bush administration.

This report summarizes the achievement and shortfalls as they relate to the "benchmarks"--Carl Levin (who Cole quotes) to the contrary. A "benchmark" is a standard by which progress may be measured or judged; and in this case, the Iraqi government has been found wanting. This is a universally acknowledged truth--acknowledged by all, except apparently Cole who believes it is a "myth" to think that ANY progress has been make if ALL benchmarks have not been met. Typical utopian/leftist idiocy.

4. Myth: The Sunni Arab "Awakening Councils," who are on the US payroll, are reconciling with the Shiite government of PM Nuri al-Maliki even as they take on al-Qaeda remnants

Cole cites some interviews with tribal leaders who intend to polish off their other Islamic rivals after they get rid of Al Qaeda. So, Juan, what else do you expect of thugs--especially religious ones? The fact that the U.S. has found a way to make them temporarily stop fighting each other and fight the real enemy is rather miraculous. If only a way could be found to make the political left (and people like Cole) stop fighting America and start fighting Al Qaeda, then I might be more upset by the driving ambition of the Iraqi thugs.

3. Myth: The Iraqi north is relatively quiet and a site of economic growth.

Cole is clearly annoyed by "the other Iraq" campaign (see here). He says that Kurdistan is a "minefield". Well, yes, so is Britain. So is the U.S. border. So is Europe, the Middle East, Africa etc. etc., for that matter. So is ANYWHERE where there are unresolved issues. Again with the desperate need for perfection from the likes of Professor Cole. Peace isn't good enough for him. It has to be utopia, with no chance of anything going wrong or upsetting the tranquility ever.

2. Myth: Iraq has been "calm" in fall of 2007 and the Iraqi public, despite some grumbling, is not eager for the US to depart.

Fact: Iraq has been calm in the fall of 2007 any way you measure it and that is because of the "surge" which Cole shows nothing but scorn . That is why the news in Iraq has dropped off the radar of the MSM (see #1), since good news like that does not serve the purpose of bashing the Bush Administration. No matter how much the left is in love with the latest "polls" --whether they be in the US or Iraq--we are in a larger war on terror, and Iraq is a major front on that war. Why not look at the larger picture, Cole? Frankly, IMHO, the US should plan on having a presence in Iraq for several decades (just as we stayed in Europe and in Japan after WWII) because the threat of radical Islam is not going to magically vanish away because the Juan Coles of the world pretend it doesn't exist.

1. Myth: The reduction in violence in Iraq is mostly because of the escalation in the number of US troops, or "surge."

Gee, how the left hate this "myth" (which means it is a reality they can't stomach). Why? Because it gives credibility to the real enemy they are fighting and against whom they have deployed all their vast intellectual resources (e.g., the useless idiot professors like Cole). And that enemy is: George W. Bush.

As Charles Krauthammer recently noted in a column:

There will, of course, be the Harry Reids and those on the far left who will deny inconvenient reality. Reid will continue to call the surge a failure, as he has since even before it began. And the left will continue to portray Gen. David Petraeus as an unscrupulous commander quite prepared to send his troops into a hopeless battle in order to advance his political ambitions (although exactly how that works is not clear).

But the serious voices will prevail.

Krauthammer goes on to provide some inconvenient reality for those sadly lacking in that commodity. The surge is, indeed, working. But it cannot work forever and will have to be replaced by other strategies that achieve our ultimate goal--a democratic Iraq. Clearly, the Iraqi government and its people will have to step up and take on more and more of the burden for accomplishing that goal, but only if that is their goal, too. Meanwhile, the US muddles along the best it can; making mistakes, learning from them and making progress.

In reality, the biggest myth of all is why anyone intelligent would take the Harry Reids or a Juan Coles seriously? 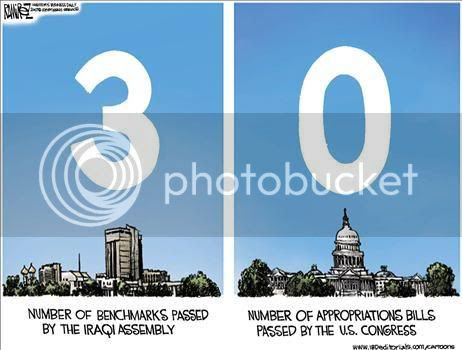 [More Cartoons by Michael Ramirez]
Posted by Dr. Sanity at 9:13 AM