If all cultures are equal, except for Western culture which is uniquely evil; then clearly all religions are equally fanatic and violent, except for Christianity which is exceptionally barbaric.

UPDATE: Wretchard has an important post up that you will have to read. Here's an excerpt:

The story is interesting because it advances two conjectures. First the native Western liberal intellectual elite is going betray every principle it espouses to a) bash America; b) keep itself "safe". As I have often said, the War on Terror has been a tragedy for the Left in a way that it has never been for conservatives. The second conjecture is that the real opposition to Islamic theocracy will come from Muslims, ex-Muslims and Christians from the Third World or Westerners who have somehow avoided drinking the fatal elixir of political correctness.

You'll have to read it to find out who is defending freedom. Hint: it s not the left. :) 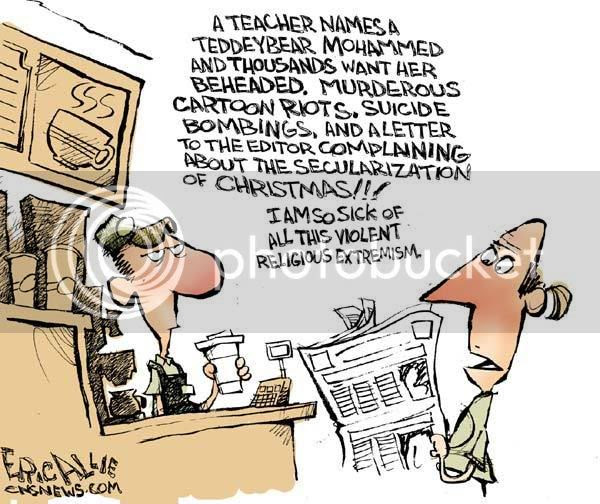 I am traveling today and won't be back to my computer until this evening. Consider this an open thread!
Posted by Dr. Sanity at 7:05 AM