Personally, I think that Iran already has a nuke that they picked up on the open market. But hey, maybe they're just a bunch of shame-avoidant braggarts? Wouldn't it be really funny ** if we bet our lives and country's future on the latter, when the reality was the former scenario? 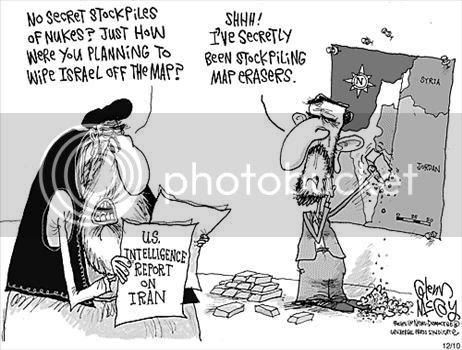 UPDATE: From the testimony of David Wurmser, Ph.D. [Dick Cheney's former Middle East advisor] to the U.S. House of Representatives,Hearing before the Committee on Foreign Affairs: “After Annapolis: Next Steps in the Middle East Peace Process” 12/5/07:

As far as the region goes, now is the time to confront Iran decisively, not descend into sideshows. This might be able to be achieved without military force, but to ignore that option and take it off the table only emboldens the regime and makes it more likely that in the long run this will be resolved by war.

Iran is entering a particularly dangerous phase of its existence, one which will lead to even further war and escalation with us either through proxy or even directly. The longer we dally on side issues and fail to confront that regime, the more dangerous this problem becomes and the more Iran will transform this conflict into a civilizational struggle.

And as far as the Palestinian issue goes, before we plunge headlong into another process grounded on the same foundations as previously failed processes, we should step back and engage in a zero-based analysis of our real interests, of our experience and of our first principles. We now have 20, indeed 80 years of experience in peacemaking (if we include Britain’s pre-1948 attempts to reconcile its commitment to Zionism with its relations with the Arab world). And arguably, we have not advanced much toward peace – other than perhaps the most stable and brief period between 1982 and 1989, which was not an era of peacemaking.