WHY THE PEACELOVING MECHANOIDS OF DOOM WANT TO FORGET HISTORY

Varifrank reminds us why a knowledge of history is so important to understanding current events (hat tip: OBH):

While the surrender of German Armed Forces was accepted by the Allies in May of 1945, fighting would continue in the European theatre of war for the next two years in the form of guerrilla and German partisan activity, known today as an "insurgency", but know at the time was "Werewolves". US Military Deaths from accidents and from partisan activity from 1945 until 1949 are estimated to be roughly 4,000 deaths, excluding the period of time known as the 'Berlin blockade', which would increase the number to 6,000. Civilian deaths in the same period resulting from starvation, harsh imprisonment, civil reprisal and the displacement of large numbers of people as refugees were numbered in the tens of thousands....

Now, it is among the most peaceful places on the planet, rivalling only the United States, Mexico and Canada for large populations at real peace with one another.

Years after the end of the war, American G.I.'s were often asked why they fought so hard in the Second World War and the answer was almost always the same:

Americans of that war and that generation, knew the high cost that comes from an incomplete victory and a policy of isolation because they had learned the lesson of 1919. The American nation was shocked at the cost of the First World War and chose to enter a period of isolation afterwards but the result was not peace, but the rise of Hitler and the Japanese Empire. The cost of the 'peace movement' that formed at the end of the First World War could be measured in real terms of the 52 million people world wide who died in the second period of conflict.

Read it all. But neither history, nor logic, nor compassion will move the peaceloving mechanoids of dooms. Their agenda has a higher purpose: the defeat of America, the imperialist, warmongering evil that infects the world. And they call this perception of America "reality-based".

On the contrary, such "thinking" on the part of the left is and always has been the socialist party line. There is no thinking involved; rather it is the same pure reflexive socialist bullshit we have heard since the end of World War II.

Postmodern philosophy has really been a boon to this more aptly labeled "delusion-based" community, who simply won't give up their utopian agenda no matter how much damage it has done and is doing to the world. With heroes like Hugo and Fidel; with allies like Zawahiri and Bin Laden and the peace-loving Palestinians; they continue their march of destruction, aided by the contradictory discourses of postmodern rhetoric; multiculti PC dogma (see here for the 10 Commandments of PC), and of course a desire to rewrite history in order to bring it in line with their utopian fantasies/delusions.

This latter tendency has everything to do with the left's deep, abiding hatred of neoconservatism.

But why should that truth give them pause? Their agenda isn't about reality at all. It is about being able to prance around demonstrating what wonderful people they are because they sincerely believe in peace and justice and brotherhood. Who cares if such behavior supports the real warmongers of the world; results in horrific injustice; and makes the concept of brotherhood laughable? They meant well and that's all that counts in their delusional brains.

I wrote in The Postmodern Narcissistic Dilemma and the Prism of Political Correctness that:

The dilemma of the postmodern narcissist is thus an unqualified belief in his or her own righteousness and moral obligation to judge the past; that is simultaneously combined with an aggressive ignorance about it.

Their behavior begs the question, how can we possibly understand our present selves--we who represent the sum of more than 5000 years of civilization--if we dismiss all that has gone before us and made us who we are?

When the very philosophical foundations that have made it possible for us to live and thrive in this modern world are abandoned because they were conceived and acted on by imperfect human beings (unlike today's "intellectuals" whose perfection is apparent to all), then what is left but the pointless and pervasive nihilism currently promulgated via postmodern political rhetoric?

The nihilism has been concealed within the doctrines of political correctness and multiculturalism, both of which cleverly assert their own absolute and inviolate truth, even as they advocate the most blatant relativism and subjectivity.

One of the most critical tasks that must be accomplished in order to unravel reason, truth and reality from human experience is a reinterpretation of the past . By deconstructing the ideas, events, and thinkers of the past; forcing them into our own postmodern procrustean template, we have essentially cut ourselves adrift from history and removed our philosophy from any anchor in the real world.

In his piece, Frank concludes:

Those who profess to be a part of the "peace movement" need to understand that the emotion of "wanting peace" alone is almost never enough to actually gain the peace they so desire.

Indeed, from their angry, bizarre, and frankly irresponsible and hate-filled behavior, you would be hard-pressed to convince the psychiatrist in me that many of them really do desire peace--or freedom, for that matter-- at all. Because their behavior suggests that the one overarching goal they march in lockstep toward is power over others no matter what the cost. And, if you are observant, you will notice that the more elusive that goal becomes; or whenever they are thwarted in their pursuit of it; the more you begin to see through the mask of that "peace, brotherhood and social justice" BS that they wear to hide their real motives.

They will never face the reality and take responsibility for the human misery and death their utopian delusions led to in the last century; and that the blind pursuit of their ideological agenda is bringing about even today--more so, in fact, since Islamism and jihad originate from the same collectivist mindset.

Observe over the next few weeks how the American left deals with the resounding defeat of the socialists in France . I predict there will be conspiracy theories galore that are developed to explain it (somehow, Bush/Cheney/Rove will be behind it all). I predict that violence protesting the results of the election will be rationalized and justified--even glorified by them as "resistance"--that's all part of the desperate attempt by the "reality-based" community to keep reality at bay and reinterpret history (i.e., external reality) to make it compatible with their beliefs.

And that is the purpose of the politically correct prism through which they perceive and interpret the world around them. It may be entirely dysfunctional and useless; it may lead to untold death and destruction--but it sure makes them feel good about themselves. 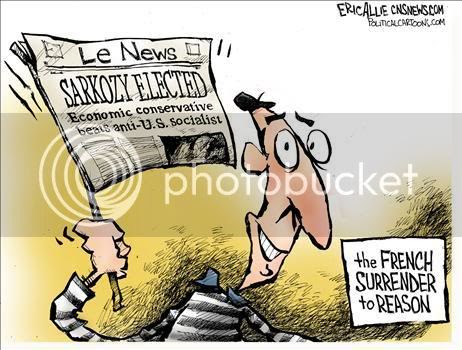