THE SANITY SQUAD- Sarkozy on the Couch 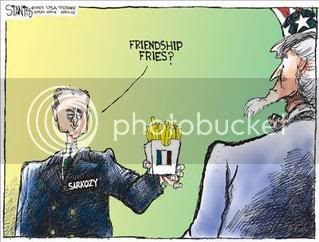 This week's Sanity Squad Podcast is now posted at Pajamas Media Politics Central; and the topic of discussion is the French election!

The election of Nicolas Sarkozy as President of France signals a significant change in Franco-American relations. Have the "Freedom Fries" of recent years that symbolized an American disappointment with France's anti-American stance, now become French "Friendship Fries"?

The newly elected leader of France is a rare and controversial combination for a French politician: an unapologetic admirer of the US, a man of action, and a believer in the value of work. What is the significance of the spontaneous outbreak of rioting by "youths"--the preferred description of the media for the car-burning, mindlessly ranting, anti-democratic leftist thugs who simply hate to be thwarted in their pursuit of power--that transpired when Sarkozy trounced Royal? What does the future hold for France under Sarkozy; and what is the meaning of the recent sharp rightward political turn in both France and Germany ? What really is happening in European politics and how does it all impact us here in this country?

The Squad not only puts Sarkozy on the couch, but we touch on some of the most important and controversial political and economic issues of our times. The political left in this country is profoundly disappointed and deeply disturbed (even more than usual) by this unexpected turn of events in France--as well they should be.

Tune in to catch all the wonderful insight, charm, brilliance, and passion you have come to expect of The Sanity Squad; as Neo-neocon, Siggy, Shrinkwrapped and I dissect and analyze the politically insanity of our times and opine freely about current events--all without the straightjacket of political correctness-- or any other leftist religious dogma for that matter-- to impede our thoughts.

All you have to do is listen to one of our podcasts and you will appreciate why we four get so much loving hate mail from the so-called "reality-based" community !

(The Sanity Squad cartoon is drawn by Eric Allie, whose collection of political cartoons can be found here and here).
Posted by Dr. Sanity at 6:26 AM