Andy McCarthy at The Corner says what needs to be said:

Folks, let's not let these guys get away with this. By "redeploy," they don't really mean move the troops to where they say al Qaeda is. They don't want to fight al Qaeda. If they wanted to fight al Qaeda, al Qaeda is in Iraq — that is indisputable. Bin Laden has said repeatedly that Iraq is the central battle. You can argue about whether al Qaeda has been in Iraq all along or whether they are there only because we've drawn them there. Reasonable minds differ on that. But however they got there, they're there.

If you really want to fight al Qaeda, you stay in Iraq.

If you really believe al Qaeda is not in Iraq — that the real al Qaeda is only in Afghanistan and its environs — then you're on drugs. But, sure, fine, "redeploy" our troops ... to Afghanistan. But can we please have five seconds of honesty? You guys don't have the slightest intention of doing that. You don't want to go to Afghanistan. You want to go home.

You think Bush is incompetent and "his" war in Iraq is a terrible mistake? Fine. You think the price of that is that we should pull everyone out of Iraq even though we all know that will be a monumental victory for al Qaeda — geometrically abetting its future fundraising and recruiting for future terrorist attacks on America? Fine.

And, that is the heart of the matter. The political left and most Democrats are in psychological denial so deep that light can no longer penetrate its darkness even momentarily. They don't want to fight al Qaeda, because then they would have to admit that America is at war and that these last six years have not just been some bumper sticker created in the mind of George W. Bush.

Reality has been just too overwhelming for them. Just think of all the fundaental assumptions about the world and themselves they might begin to question.... I see this anxiety and dread all the time in my psychiatric practice--patients who are willing to do almost anything to end the chaos and dysfunction in their lives...except change their beliefs about themselves and the world. That is far too painful, Doc--how could I be so cruel to even suggest such a thing!

Take a very close look at these rationales. These are not "strawmen" reasons. These are the things people say to me in comments here and in emails (although I have summarized them much more politely).

First, what relationship do polls have to reality? The only reality they reflect is what people happen to believe at a given moment in time. The reality of the consequences of leaving Iraq are not influenced by such nonsense. The reality that we are fighting al Qaeda and that Iraq is the central battlefield of the war we are in is not subject to majority opinion. It simply is fact. The reality will not go away because people refuse to believe it. Or, prefer to believe that this is a fantasy in George Bush's mind.

Yes, I concur that the war is going badly. It is extremely difficult to wage a war when there are hundreds of ill-informed and imcompetent generals managing things thousands of miles from the battlefield; and all of whom have agendas somewhat incompatible with success on that battlefield. I also don't deny that that there have been mistakes made on that battlefield or by the CIC. But then, I don't demand perfection in a war. I don't demand pure political correctness on the part of our soldiers. I don't demand that there be no casualties or deaths. I don't idealize the barbarians we are fighting; I don't put them on the same moral ground as us and I don't give their murderous behavior a free pass while weeping and wailing and wringing my hands at America's.

The only thing I do demand is that we do everything possible and necessary to ensure victory over the creatures we are fighting and that we establish the hope of a democratic country in that cesspool we call the Middle East. I understand that more Americans will die. I have made the [rational] assumption that this is exactly what nations have military organizations for; and that military personnel courageously choose to fight in order to protect those they love at home--otherwise they would not join the military and assume those risks.

Silly me, I guess.

You don't learn these truths from the Edwards & Obama Academy of Political Pandering; or at Hilary & Nancy's Day Care Centers.

The left, by refusing to face reality about Iraq and the war on terror, must find it awkward and just a bit embarassing to find themselves--yet again!-- in complete agreement with the absolute dregs of humanity. Indeed, rather than face reality, they willingly ally themselves with dictators, murderers, rapists, thugs and assorted psychotic insects. Their ever-deepening quagmire of denial is nothing, if not thoroughly encouraging and supportive of all types of loathsome cockroaches scurrying around in that part of the world who have nothing but the most peaceful of intentions.

How fortunate for them that in the wonderful world of denial, all sorts of fantasies are possible! 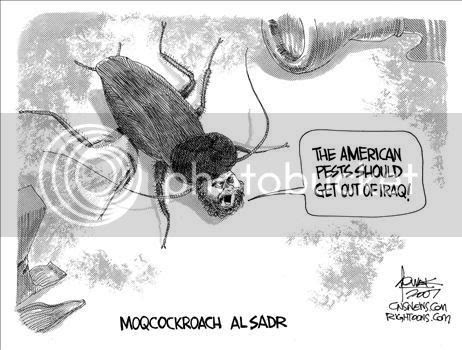