I find it remarkable how the left in this country is taking on such a nuanced and sympathetic perspective about Hugo Chavez' latest dictatorial power play in Venezuela--in fact, check out the always entertaining DU threads, and Daily Kos to find incredibly spirited and emotional defenses of the fascist thug that is now ruling Venezuela.

In their compassionate hearts, they just know that the only real fascist in this world is George W. Bush. And all the polls tell them that they are in the majority, therefore they must be right!

Let's hope their love for Chavez will withstand the latest Venezuelan polls:

Polls released today show that 80% of the population is against the government's shut-down of RCTV. The number of Venzuelans who think Chavez is trying to set up a dictatorship has gone from 40% to 60% in the last week.
Alas, this realization may have comes a little too late. The president is already ruling by decree, with rubber-stamp legislature and judiciary. The tragedy of Venezuela has an overwhelming momentum now.

History doesn't repeat itself, but it often rhymes; and who can forget Jane Fonda sucking up to the North Vietnamese; Cindy Sheehan kissing Hugo with girlish glee and so on ad infinitum.

You can always count on them to support and rationalize the behavior of the genocidal maniacs and the trendy socialist dictator du jour. SC&A get it right:

It is notable that whenever the Vietnam debacle is alluded to, as of often the case in attempting to make comparisons to the current conflict, no one ever mentions that it was Presidents Kennedy and Johnson that foisted that war upon the country- Democrats. No one today ever refers to those Presidents as ‘Hitler.’ When you consider that over 57,000 Americans died in that war, we find the lack of outrage curious, though not at all surprising. It is also interesting to recognize that President Johnson, who signed the Civil Rights Act, is not credited for wanting to keep South Vietnam free and democratic. After all, a free and democratic society is what leftists abhor and fear most. Hugo Chavez tramples on his critics, on free speech and a free press and the leftists are for the most part silent. Chavez can do what they can only dream of doing. As we have noted, Utopia cannot be imposed without tyranny.

We should never forget that it is tyranny, disguised as utopia, that the left yearns for.

The do-gooder leftist in all the various ideological incarnations--the antiwar crowd, the environmental crowd, the communists, socialists, and assorted collectivists--offers the rationale that he does what he does for the "common good" and for "social justice", "peace" and "brotherhood". His high-minded, self-righteous rhetoric justifies (to him anyway) imposing his will and beliefs on others for their own good; and he will not hesitate to use whatever coercive capablity he has at hand to get others to do what he wants and what he says.

The capitalist, on the other hand, is overtly out to pursue his own selfish profit, and understands he must use persuasion. That is, he must convince people that his ideas and the products of his mind are better than all the rest so that they will be willing to part with their hard-earned money to possess them. His desire for power over others is manifested in an indirect manner because people must wnat what he has to offer and believe that they will benefit from an interaction with him.

There is no parallel social limitations on the behavior of the leftist. This tyrant wannabe does not feel the need to convince others of the veracity or even the effectiveness of his ideas; nor does he accept defeat when others are not interested or resist their implementation. He knows in his heart what is best for everyone, and he will use coercion if necessary. He will not allow options; nor will he permit others do do what they think is right for themselves. Their feelings or concerns are a matter of complete indifference to him. Only his own matter.

The leftist's desire for power is direct and absolute; and this is a direct consequence of his utopian ideology.

At any rate,Chavez has never hidden his totalitarian agena or his true colors. Those who still support his tyranny are simply the color-blind drones of the left.

The tragedy of the political left also has reached an overwhelming momentum; and Venezuela's descent into hell is mirrored by their descent into psychological denial, delusion and displacement. I wonder if they will open their eyes when Chavez starts killing his own people like Saddam and all the other thugs in history have done.... Or, when he moves to take over other radio and TV stations that don't toe the socialist line.

But they'll find a reason to excuse all that, too. He's one of them, and his intentions are pure as the driven snow. Just like this group will always get a free pass, as will all the other terrorists in the world today.

Venezuelan President Hugo Chavez on Tuesday called opposition news channel Globovision an enemy of the state and said he would do what was needed to stop it from inciting violence, only days after he shut another opposition broadcaster.

Tens of thousands of Venezuelans marched in Caracas in a fourth consecutive day of protests over Chavez's closure of the RCTV network - a move which has sparked international criticism that the leftist leader's reforms are undermining democracy.

Well, so what? say the Kos Kiddies. "These private stations, owned by anti-Chavez billionaires and businessmen, have led an unceasing anti-Chavez campaign since the day he was elected."

And we all know that billionaires and businessmen are inherently evil, don't we? 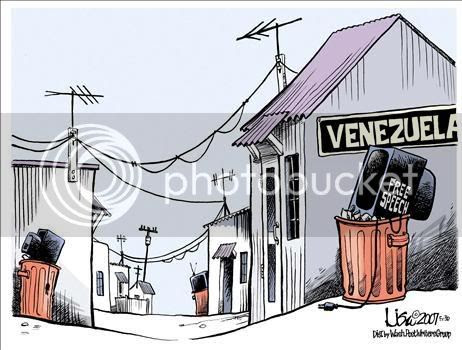