A VISION OF THINGS TO COME

If you have not seen this ad which was taken out by Iran in the International Herald Tribune, I urge you to read it carefully:

The Nuclear Power Production and Development Company of Iran (NPPD) (an affiliate company of Atomic Energy Organization of Iran – AEOI) as the owner, invites sealed Bids from contractors/companies for the Design, Supply of Equipment, Construction and Commissioning of two large scale units (1000-1600 MWe each) with third generation Nuclear Power, Pressurized Light Water Reactor in the Bushehr Province of Iran.

Qualified bidders who have sufficient experiences in the Construction and Commissioning of such plants are requested to obstain the respective Bid Inquiry Specification (BIS) documents upon payment of a non-refundable fee of €15000 (fifteen thousands Euros) transferred to the following account:
Account no.: 01754283800
Name of Bank: Austria Bank-Creditanstalt
[...]
All bids must be accompanied by a Bid Bont of twenty million Euros, and must be delivered to AEOI’s representatives office in Vienna by 02.08.2007 or to the company’s headquarter office in Tehran on 08.08.2007. The bids will be opened at the company’s headquarter office in Tehran on 08.08.2007 at 10:00 am in the presence of the Bidder’s Representatives who wish to attend.

Lest you think this is something to laugh at, Claudia Rossett cautions:

...this ad spectacularly embodies a message that is no fiction and no laughing matter. Iran's rulers are in no way taking seriously the diplomatic calls and hand-waving from the United States, the European Union, and the U.N. to desist in their nuclear bomb program.

Why should they? Iran, in its trek toward the bomb, has paid no serious price. It is becoming routine to see Tehran defy even the watered-down U.N. Security Council resolutions that its big business partners in Russia and China allow to slip through. Iran openly trains and supports terrorist groups such as Hezbollah, which has killed more Americans than any terrorist group except al-Qaeda, and launched an unprovoked war against Israel out of Lebanon last summer. Domestically, the Iranian regime, in violation of human decency and the terms of its U.N. membership, jails, tortures and murders dissidents who aspire to replace their nation's malignant theocracy with a free and open system. 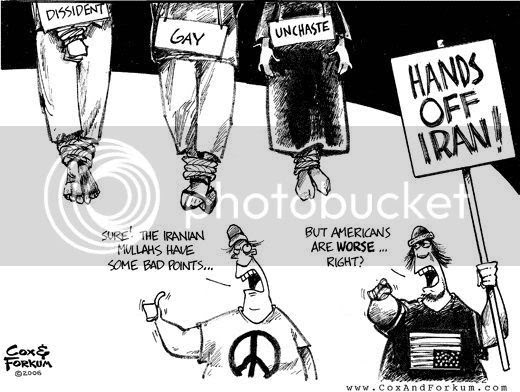