WE ARE ALL SERFS NOW

Caroline Glick today in the Jerusalem Post talks about some students at Cambridge University who had the sheer audacity to mock the hypocrisy of Muslims because they accuse British society of racial prejudice while at the same time calling for its violent destruction. How did these politically incorrect students mock them? By publishing in their student magazine some of the Danish cartoon caricatures on the one-year anniversary of that brouhaha. Reprisals--including death threats-- on the students by Muslims, their College, and the police were swift. Glick notes:

The persecution of these students provides a case study of the two-pronged offensive being carried out today against Western culture. First there are the jihadists, who call for our destruction. Then there are the leftist intellectuals and public figures who defend radical Islamists and work to silence those who criticize them by criminalizing speech and condemning free thinkers as racists.

The direct consequence of this two-pronged offensive is the repression of free thought.

Meanwhile, the free speech that is being promoted by these leftist "intellectuals" in this country includes defecating on the US flag.

None of these peaceful protesters would ever be so insensitive as to hurt the feelings of Muslims (even the most radical of them); but it is OK by them to trash and vilify America; carry around extremely vulgar and obscene signs depicting Bush and Cheney; signs saying "Death to the world's #1 terrorist pig Bush and his Sheep" and "Kill Bush Bomb His F--king House" and wearing t-shirts that say "We are all Palestinians Now".

You won't see a single one of these morons taking it to the streets for the rights of their fellow students to publish the benign caricatures on the right side of this page.

If, indeed, "We are all Palestinians now", then you will see no middle-aged, grinning hippie-type upset by the following facts of Palestinian life :

…Palestinian kindergartens teach their charges to march and sing the ditty, ‘HAMAS! HAMAS! JEWS TO THE GAS! It goes without saying that proud parents applaud. Not a word from Massad as children of suicide bombers appear on state television proudly parrot what they are taught hold up a hand, fingers outstretched and declare their pride in the mother that killed ‘this many Jews!’ 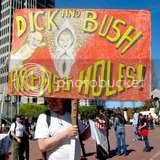 That protester's sanctimonious hatred of America and Israel- sanctioned by leftist multicultural dogma--allows the "oppressed" masses in Palestine-- to get away with murder and child abuse...literally.

Nor will you see today's leftist feminists marching in solidarity with this woman ; or outraged by the pervasive institutional sexual hypocrisy and subjugation of women that is just "oppression business as usual" in the Middle East.

These "champions of social justice" have no time for such frivolous trivialities since they are proudly baring their breasts against American "imperialism" and aggression. They are defiantly "speaking truth to power", strutting their incredible cowardice in front of the cameras for all to see.

Because either they are too afraid to confront the real, malignant evil that is spreading like a cancer around the world; or, as Glick suggests, they are deliberately working in tandem with that evil, to overthrow freedom, democracy and enslave the world to its horrific vision.

In the first case they are in psychological denial and using displacement, projection and paranoia to avoid a lot of upleasant truths about their malignantly narcississtic selves. I won't discount the fact that they are also incredibly stupid, naive and malicious. It is likely there are elements of all those processes.

In the second case, they have allowed themselves to become--wittingly or unwittingly--a crucial part of that evil and indistinguishable from it--just like the protester below. Either way, they have chosen to drag us down the road to serfdom; and --God help us (or, as the Islamists say, Inshallah, Allah willing)--we will indeed all be Palestinians soon.