This week, the latest podcast of The Sanity Squad at Pajamas Media focuses on the obsession with the confession of key Al Qaeda psychopath, Khalid Sheikh Muhammed (affectionately known as "KSM"), who has been singing like a bird in Gitmo. Whether that confession is the product of braggadocio and waterboarding, or the real deal, the question becomes: why are we so obsessed with the context of his confessions rather than the content of his crimes? As per usual, the MSM and the left are mostly obsessed with with inconsequential aspects of this malignant mass murderer's revelations of evil. 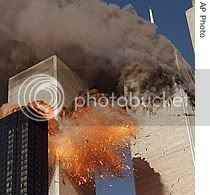 Is their confession obsession just another attempt to pretend that 9/11 was simply a sad and tragic event that just happened, like some sort of natural disaster; and not a horrific act of war on the scale of Pearl Harbor?

If you want to know about KSM, read this; then take a look at his confession. Is there anyone who doubts his stellar credentials as a mass murdering terrorist kingpin? Whether he's also a braggart or not is wholly immaterial. This is a guy directly responsible for the deaths of thousands of innocent lives. But somehow, since his capture he has morphed into just one more "victim" of brutal American torture.

This is all part of the unbelievable insanity that continues to swirl around the prosecution of this war, the most "politically correct" war in history.

Join Shrinkwrapped, Neo-neocon, Siggy and me as we enter into the mind of a mass murderer; then into the mind of the mass media and the political left, who simply can't quite grasp the enormity of the evil we are up against in this war on terror--or just don't care.

(The Sanity Squad cartoon at the right is drawn by Eric Allie, whose collection of political cartoons can be found here and here).
Posted by Dr. Sanity at 10:32 PM